Film Review of ‘THE WATER DIVINER’ 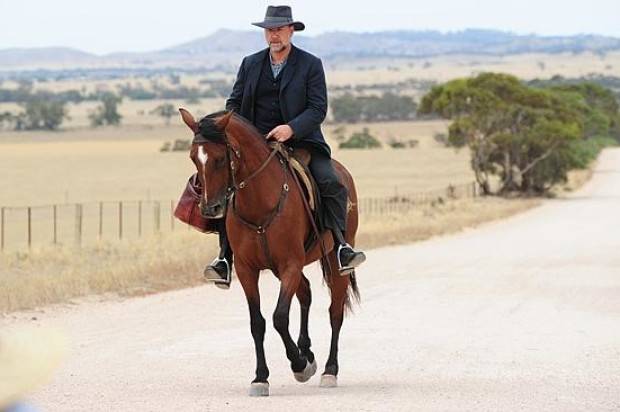 Centring his directorial debut on war, bravery and loss, Russell Crowe proves an adequate presence behind the camera with ‘The Water Diviner’, an obvious passion project for the actor who has chosen something both distinctly iconic and considerably unique. As the end credits inform us, there were 37 million soldiers killed or wounded in World War 1 and there are plenty of stories to be told. With many having been detailed already, it was perhaps the notion that ‘The Water Diviner’ details a rather unusual story is what attracted Crowe to his duties.

Crowe stars as Connor, a hardworking man of the land currently searching for water on the barren land of North West Victoria. Managing to find water underneath the dry, red soil using his uncanny ability of detection, it’s with this instinct that he ventures out to search for his three lost sons, all of whom are presumed dead; “You can find water but not your own children”, a stirring remark from his distraught wife (Jacqueline McKenzie), ringing in his ears. His travels to Turkey are naturally offset by hurdles and personal danger, but Connor is a man of his word and refuses to give up. The film could easily be criticised as it asks a lot from its audience to accept that Connor’s capability to locate his sons’ remains at Gallipoli is through some mysterious inner sense, but somehow this mystical element feels relatively organic in a story that, although details the hardship and horror of war, is a love story at its core.

The introduction of Olga Kurylenko, as single Turkish mother Ayshe, provides Connor with another sense of purpose as he searches for his sons and, for the most part, their romance is handled adequately; a candle-lit dinner scene between the two is perhaps the most Hollywood-ised moment of the film, but the shared chemistry is enough to forgive such a jarring intrusion. Kurylenko is ever-so beautiful and tranquil as Ayshe, contributing just one of many surprise performances that help elevate the film beyond expectation. Dan Wyllie captures the insufferable nature of those in command in a wonderfully nuanced turn that stops just short of caricature, Steve Bastoni is a pleasant surprise as Ayshe’s missing husband’s brother, waiting anxiously in the wings to take her as his second wife, and Jai Courtney excels as the commanding officer unsure of how to handle Connor’s appearance at the battle grounds.

The film’s strongest presence though is that of Yilmaz Erdogan as the Turkish Major Hasan, formerly the enemy and now sought to help due to his knowledge of war. He’s a complex character, being both solider and humanist, and the fact that he’s quite sympathetic – despite his actions in battle – helps add a sense of reality. Emotions naturally run high between himself and Connor, and it’s the tense dialogue they share that provides some of the film’s best moments.

Crowe has made quite a striking debut, and you can only imagine he’ll improve with further efforts as ‘The Water Diviner’, whilst far from perfect, sets a staple and leaves no question that the man can direct. It’s a respectful film, bringing the history of war to life whilst also making it deeply personal, and it’s in the unexpected manner that it tells its story that helps make the film worthy of a visit.