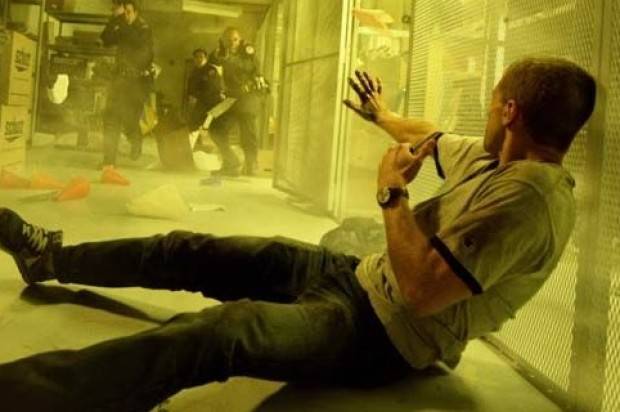 The subject of time travel is always a tricky one to master when it comes to cinema. It’s been done countless times before, and spliced with numerous genres in the attempt of presenting us with something we have yet to see. Hoping that the tried and true subgenre of “found footage features” would elevate the story to a level of interest, ‘Project Almanac’ brings little to the table, and when it does finally deliver, we’re ready to transport on to the next outing.

As is the case with most found footage films there is little reason for the characters to be filming every aspect of their lives, especially mundane activities like talking amongst each other during lunch, and even though this film figures out a way to justify it in its opening scene, there’s very little benefit to the project overall. Once you accept this plot device the film is a little easier to digest with it presenting a “what if” type scenario – what would you do if you could go back in time? Unfortunately ‘Project Almanac’ doesn’t utilise this to its fullest potential, instead catering to its teen market by having its lead quintet of highschoolers (who thankfully look like they are actual teenagers) partake in superficial frivolity like rigging the lottery to net a million dollars, exacting revenge on the bullies at school, and gaining VIP entrance to a high-profile music festival. These events are all very well and good for the characters involved (and the actors seem to be enjoying themselves too) but there’s only so much viewing of other people’s pleasure we can stomach before it becomes too self-indulgent.

In the lead-up to aforementioned frivolousness, teenage genius of sorts David (Jonny Weston), in a last-minute effort to try and scrounge some much needed funds to cover his MIT tuition fees, digs through his late father’s belongings and comes across a video camera, one that contains footage from his 7th birthday, the last event David saw his father alive. Reminiscing with his younger sister (Virginia Gardner) David uncovers a rather shocking discovery whilst reviewing the footage – his modern-day self is visible in the background of the party. Trying to make sense of what he has seen, and hoping to convince his fellow science enthusiast friends Quinn (Sam Lerner) and Adam (Allen Evangelista) in the process, David tears his way through his father’s basement workshop and unearths blueprints for a “temporal displacement” device; “We can’t build a time machine in my basement” David exclaims, before Adam reminds him of the camera footage – “I think we already did”.

After a few too many sequences of the group attempting to perfect the time jumping process, which by this point has also seen David’s highschool crush Jessie (Sofia Black-D’Elia) hone in on the action, the film has spent so much time focusing on their adventures that by the time a real sense of danger is introduced, the film feels ready to wrap itself up and we aren’t given any real explanation as to why certain jumps back in time have dire consequences and others don’t. Quinn continually jumping so that he can ace his science test has no repercussion nor does David’s sister exacting payback on the girls that bully her, yet David returning to the music festival to make a move on Jessie results in a butterfly effect where a fellow classmate is hospitalised following a car accident which leads to a fatal plane crash that rocks their community. Admittedly this is where the film is the most interesting, even if it doesn’t clarify itself, but sadly its ending provides more questions than answers, a disappointing outcome for a film that was sailing at a leisurely for the majority of its running time and didn’t seem intent on delivering anything of interest.

‘Project Almanac’ was never going to be the type of film to shake its respective genres up, and though it’s aimed at a younger audience the film would’ve benefitted from not playing it so safe – especially in the third act where it veers into darker territory – but there’s a certain fun-ness to it, a factor its target audience should lap up in spades.