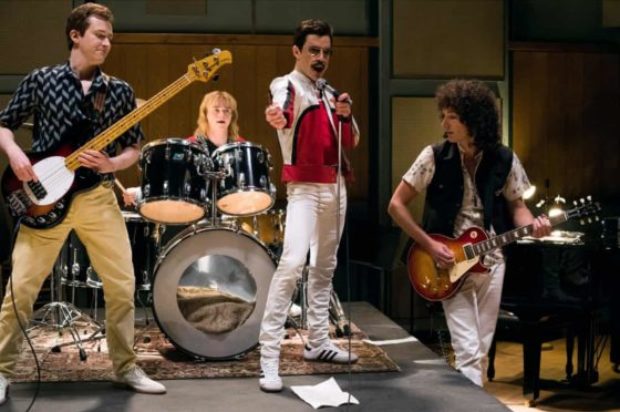 For any fans of Queen one of the most famous bands of our time, with the unique lead performer singer Freddy Mercury the film Bohemian Rhapsody has to be seen.

With the fact of Star is Born just released and getting Oscar buzz this is up there too for Oscar of some kind I hope for a fact it is well executed film.

Farrokh Bulsara was the real name who hailed from Zanzibar, raised in India, at age of 17 moved to London with family. He worked in airport being a bag collector while inspiring to get into bands and sing and write songs. His dad wanted him to follow a respectable pathway but that was never to be as to when he first meets the guitarist, Brian May, (Gwilym Lee) and the drummer, Roger Taylor (Ben Hardy), and tells them he should be their frontman after a gig night in a down town pub who they have just lost their lead singer.

The American-Egyptian actor Rami Malek plays the Indo-Parsi Mercury, wearing a set of false teeth to recreate the singer’s famous overbite and the four extra incisors that gave him a greater vocal range. I can only imagine when he got the role he would of been so nervous but his portrayal is so good and knowing he be under the scrutiny of so many critics.

Written by Anthony McCarten (Darkest Hour, The Theory of Everything), it touches on the details of Mercury’s relationships specially his closeness to Mary his longtime companion (Lucy Boynton), to whom he was engaged before coming out, which leads to showing his antics when he lived life as a gay man.

The film has Directer X-Men director Bryan Singer, who was fired late into production and replaced by Eddie the Eagle’s Dexter Fletcher, and while we’ll likely never quite know for sure just how much of the final film is due to which director.

While you see the way the music was made, and how they had to sell themselves as ‘Queen’ to when he Freddie tries out a solo career is what is the rock and roll story of the band that concludes to the Live Aid concert. This is a great reminder of how amazing Freddie Mercury was as a performer of our time and pop genius. He died of an Aids-related illness in 1991.

Bohemian Rhapsody film will rock you!