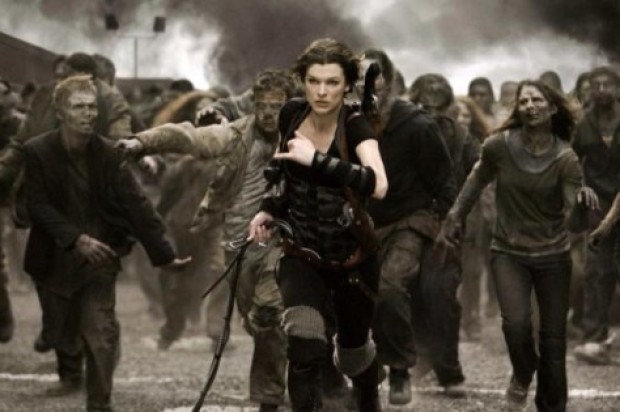 Thanks to a “previously on ‘Resident Evil’” type prologue, the supposed last entry in this inexplicably long-lasting series brings both the casual movie goer and devoted fan up to speed as to what writer/director Paul W. S. Anderson has been travelling towards. Similar to the ‘Underworld’ series the ‘Resident Evil’ films possess a “never say die” mentality, even when you know it should relinquish, and whilst you can say ‘The Final Chapter’ is a fitting end, there’s a lingering sense that this cinematic carnage is far from over.

Though it helps to have been with the series from the beginning (15 years ago!!) ‘The Final Chapter – save for a few previous plot mentions – essentially acts like a stand-alone film. For the uninitiated, the short version of just exactly what madness is taking place all began with the Umbrella Corporation (a comically evil company if ever there was one) who developed a medical miracle serum of sorts known as the T-Virus. As to be expected, all did not go to plan and some serious unintended side effects reared their ugly head in the form of sudden death, zombification and animalistic mutations.

Throughout it all has been Alice (Milla Jovovich), an amnesiac who awoke in the original film unaware of herself or her connections to Umbrella. To say it’s been a long trek for Alice as to find answers would be an understatement, but she’s had an awful lot of bloody fun (emphasis on the bloody) along the way as she has perfected her combat skills to a tee; she also garnered super powers of sorts at one stage but by this film she’s as human as the film will allow. As ridiculous as the situations she has found herself in have been, as well as the ludicrous dialogue she has sputtered, Jovovich’s conviction to the role of Alice has never wavered, and it’s her commitment to this series that has been its strongest sense of life support. You could surely dub Alice one of the finest heroines of the action genre, and Jovovich is wholly convincing; it’s just a real shame that no one else in the series has been treated with as much respect.

For ‘The Final Chapter’, which begins in a wasteland where there are less than 5,000 people left alive on the planet (with a devastated White House shot for timely effect), Alice is informed by The Red Queen (Ever Gabo Anderson, Jovovich and Anderson’s real-life daughter), an artificial intelligence system created by Umbrella, that she has only 48 hours to save what’s left of humanity. Just why The Red Queen seems intent on helping Alice after vowing to destroy her in the previous entries is one of the many questions the film asks and, admittedly, where Anderson guides his story is more intricate than one would assume.

Of course, as smart as this film wants to be, it can’t be denied that many of its elements are uniformly wasted (the supporting players are completely interchangeable) or indecipherable (the kinetically edited action sequences are filmed in such close range that there’s no display of the finesse that’s clearly gone into choreographing them), and you can’t help but feel a little cheated that it can’t even commit to its promise of this being the “final” chapter; the film unable to help itself thanks to a closing shot that suggests Alice’s woes are from over.

The ‘Resident Evil’ series was never one designed to please critics, so in that regard it’s been a great success, and while you could never claim the films as being cinematic gems in any way, they’ve offered their share of arguably fun moments. Given how poorly the last entry (2012’s ‘Resident Evil: Retribution’) was compiled, an improvement in all aspects was never going to be a difficult task, so whether it is a case of low expectations or maybe the fact that Jovovich is just that good at holding focus when everything else is crumbling, ‘The Final Chapter’ survives on her pluck and its contentment to play within the constriction of what this genre has to offer.