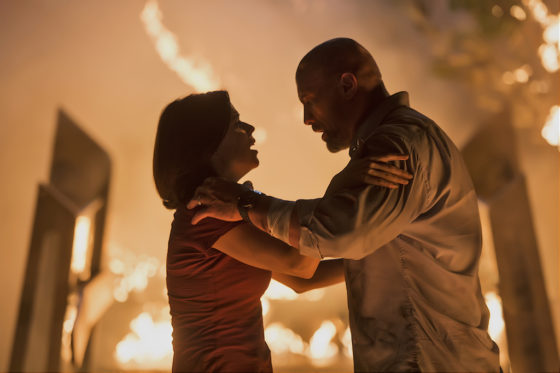 Dwayne Jonson ( The Rock) plays an ex FBI Wil Sawyer who lost his leg in a FBI Siege gone wrong and is now a security specialist in his own business that operates out of his garage. Thanks to his friend he is contracted to make a security assessment of the fictitious “ Pearl” a 220-storey skyscraper in Hong Kong. He, his wife (Neve Campbell ) and two children are the first to try out the residence levels of the Pearl, but alas it turns out this lucky break is not lucky at all. His friend is working with the bad guys being a foreign accented villain ( Roland Moller) and a super hot villain sidekick ( Australian Taiwanese actor and model Hannah Quinlivan ) and evil insider ( Noah Taylor ).

Terrorists take over the Pearl and due to unforseen circumstance the family is trapped in the burning tower and its up to Sawyer to save them. This film pays homage to other disaster movies such as Towering Inferno and Die Hard and delivers what you expect. Sawyer scales unbelievable heights up a crane and yet still has the energy and strength to swing on a crane hook to the building, hang on the ledge with broken glass and pull himself up phew that was lucky .

But there’s more …later to save his daughter being held by the bad guys he fashions rope and duct tape and is able to scale the outside of the building to access an panel and after almost falling manages to hang on by his prosthetic leg to avoid a drop to certain death.
Unbelievable stuff, yes really unbelievable stuff but as a big fan of fiction this didn’t bother me as long as it’s a fun ride I’ll go with it.

Unfortunately that one ingredient is missing Will Sawyer is a serious family man who is playing a serious character in a what should in my view have been a fun rollercoaster ride of a film. The Rock is known for his goofy fun humour and positive outlook and this character is a bit drab. That’s being said he is the Rock and I will pretty much watch anything he is in anyway. There are some cool toys, effects and the techy stuff that would go on my Christmas list if it were real.

There is still a lot to like, plenty of suspenseful moments, fight scenes, explosions, gun fire ,
and you cant help but breath a sign of relief every time he or his family make it past the obstacles. Not memorable but enjoyable worth the price of a ticket if you want to switch off and go for the ride.