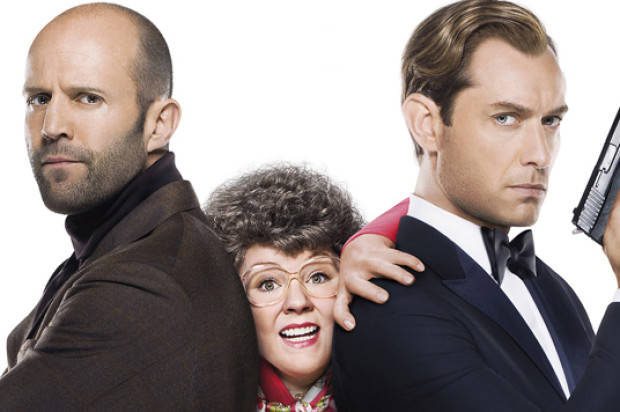 After promising to be the fearless performer the comedy genre needed following her turn in 2011’s runaway success ‘Bridesmaids’, Melissa McCarthy hasn’t always delivered on her potential since. Whilst her clear lack of vanity (a trait all good comedians should discard) is evident, features like ‘Identity Thief’ and ‘Tammy’ weren’t the kind of projects doing her shtick any favours; both titles deriving their laughs specifically from the actress’s plus size. Reuniting with her ‘Bridesmaids’ director Paul Feig for the Sandra Bullock buddy action/comedy ‘The Heat’ proved a step in the right direction with McCarthy’s signature use of profanity and shamelessness in gag completion paving the way for laughs instead of them being at her aesthetic expense. Clearly a working relationship that’s successful as both a business and friendship, Feig and McCarthy have unified once more for ‘Spy’, a James Bond-esque spoof that works as both a parody of the genre it’s skewing as well as a humorous actioner on its own accord.

Prior to an opening credit sequence that would make Ian Fleming enthusiasts gleam with familiarity, we first meet ‘Spy’s unsung hero Susan Cooper (McCarthy) as she coaches the CIA’s top agent, Bradley Fine (Jude Law), through a deadly mission in Bulgaria. Acting as his eyes and ears through hidden equipment, the credentials of Cooper, an unassuming desk jockey in the agency, become quickly apparent as she sharply schools 007-stereotype Fine to the whereabouts of a missing Nuke. There’s a playful, flirtatious banter between the two (it’s not hard to guess whose feelings for who are stronger) so when Fine is taken off the grid, Cooper blames herself and in classic let’s-get-this-fish-out-of-water plot formation, she’s assigned to track down Bulgarian arms dealer Rayna Boyanov (Rose Byrne) to complete Fine’s mission. Clearly an intelligent and highly capable agent, Cooper is a little thrown when her induction to field agent doesn’t live up to expectations, with her selection of gadget weaponry kept in tune with the frumpy identity she is handed; constipation pills, haemorrhoid treatment and anti-fungal spray.

As she not-so-gracefully swans about the various European locations ‘Spy’ sends her to, Cooper finds it a mission in itself to remain inconspicuous as she deals with rogue agent Richard Ford (Jason Statham), a wild, unpredictable character who’s convinced Cooper will bungle the mission, and feels it his duty to keep a close watch as he deems himself an indestructible force; Statham is clearly relishing the chance to send-up his tough-guy persona as Ford endlessly rants on his (unlikely) achievements in the field, including (but not limited to) being immune to over 100 different types of poison and flying through the air on fire. It’s a surprising turn from Statham but one that is extremely welcome, and when playing off McCarthy, he’s exceptionally spirited. The casting overall is one component that feels practically flawless in ‘Spy’, with Allison Janney’s humourless CIA boss and the tall, gangly Miranda Hart as Cooper’s best friend Nancy a real treat; Hart is especially adorable as the rather impressionable Nancy whose own graduation to field agent allows the farce-friendly talent to showcase her comedic strengths. Bobby Cannavale sadly has little to do as a slippery terrorist hoping to get his hands on the nuke (he’s charming nonetheless) and Morena Baccarin’s seemingly perfect female agent is unable to rise above cardboard cut-out status, but they’re minor quips in a film so vigorously driven by its performers, with Byrne’s bratty villainous bombshell a particular stand-out. With hair almost too full to defy explanation, and a wardrobe so stereotypically chic it begs for a punchline (“slutty dolphin trainer” as Cooper so casually remarks), Bryne continues to dominate within the comedy genre with her subtle yet biting quips and fresh lack of self-consciousness.

Though it’s slightly working as a spoof on the spy genre, the film never enters full-blown parody (ala ‘The Naked Gun’) with Feig’s work acting more as a straight comedy that just happens to be confined within the world of espionage. There are nods throughout (the aforementioned gadget scene for one) but ‘Spy’ operates on its own frequency and leading the charge is McCarthy who blends her distinct brand of humour without going overboard (thankfully), creating a character that’s compassionate, feisty, comical and, surprisingly, kind of a badass; the action quota of the film also delivers with a series of unexpectedly violent moments that manage to keep their wits about them with McCarthy’s kitchen girl-fight with a sleek assassin of sorts emerging as one of the film’s best sequences.

If you haven’t de-boarded the McCarthy train yet ‘Spy’ is a happy reminder of why you jumped on in the first place, and if her penchant for playing the sizeable crude card became too much, this deliriously entertaining actioner is likely to convince you of the other hands she’s able to play. Though still the Melissa McCarthy show, ‘Spy’ is enough of an ensemble piece to warrant a recommendation regardless of your feelings for the leading lady who, once again, showcases her innate sweetness and that valiant mentality that made us fall for her in the first place.