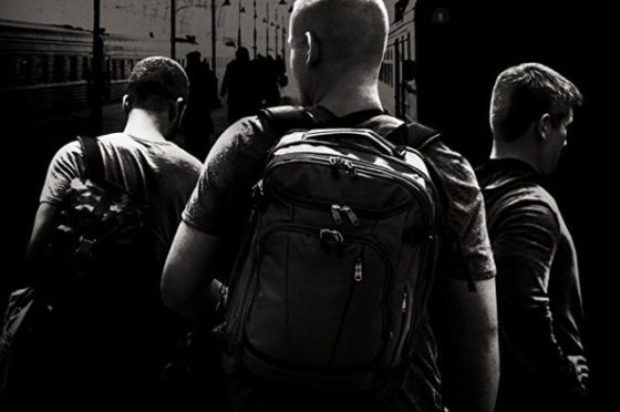 Perhaps Clint Eastwood’s days as a great director are over, going by his latest offering. Or perhaps this screenplay just didn’t have enough interest in it to sustain a feature film, albeit a comparatively short one, at 92 minutes.

“ The 15:17 to Paris”. This film is interesting for the fact that it tells the story of an event in August 2015, and the 3 young male stars are the actual young men who participated in dramatic events on the Thalys fast train between Amsterdam and Paris. At Gare du Midi, a Brussels train station, a 25 year old Moroccan man boarded the train. He went into the toilet and was noticed to have been a long time and a couple of men were waiting outside the door. When he opened the door, he was shirtless, but heavily armed and dangerous. One man instinctively tackled him, there was a scuffle, a shot was fired, and one passenger was shot and was on the floor losing a lot of blood. In the carriage, were 3 young men, Americans, life-long friends, two of them with training in the armed forces. They showed the benefit of their training, and did not hesitate to charge at the assailant. With help from a couple more male passengers, (French and British) they took his gun and knocked out the Moroccan, trussed up with ties and whatever else was to hand.. One of the Americans spent 20 minutes with 2 fingers jammed inside the bullet hole in the neck of his fellow passenger, pressing on the artery and thus saved his life. The train was diverted to a station about 20 minutes away and the police, and medical help boarded , removed the injured, the would-be shooter, and it was all over.

This is all public knowledge, and I’m sure most people remember that it was widely reported around the world.
However, I am sad to say that this is really the only interesting part of the film, when it begins to feel like a Hollywood Studio film directed by a legend, rather than home-movies.

For two-thirds of this one and a half hour movie, we are watching the standard growing up of 3 ‘All-American boys’, nice boys, good people with caring families. The opening scenes are truly awful, because they show two of the mothers getting repeatedly called to the office of the Principal of their Christian private school. However the film does not show their sons as even slightly deserving of being in trouble, OR having Attention Deficit Disorder, as one teacher informs the flabbergasted mothers. She thinks they should be on medication, but we the audience have seen nothing unusual.

This film could have been considerably improved and more interesting, if there had been an attempt to balance their All-American stories, with the story of the young Moroccan man…. Who was he, why was he on the train with all these guns. What was he thinking? What led him to this? He later claimed in court that he wanted to rob people, not kill, but he had enough firepower to kill most of the passengers. However, he appeared to be very inept with weapons, and fortunately for almost everyone, the AKM assault rifle jammed. He seemed to be a lone amateur and a bit of a bungler too. I might point out that there is a large community of Moroccans who live in Belgium, most of them good law abiding people. Way back in 1964 the Belgians invited them to come to live there and work in their coal mines, also steel and auto industry – work that Belgians weren’t keen to do themselves.

As for the young American heroes, following the childhood scenes, there’s a stretch of watching their grown up years, finding careers for themselves, and till close friends, keeping in touch via Skype.

When they plan a backpacking tour together in Western Europe, there’s more footage reminiscent of any American tourists’ amateur video recording – yes, far better quality than that would be, I admit, however the content is unremarkable… Eastwood seems to want us to only see the glories of Europe as a backdrop to the young heroes. The friends take a lot of Selfies, see a few of the compulsory “tourist attractions” in Italy, Germany and then go off to Amsterdam, after meeting an elderly musician in a bar, who tells them how great it is there. As they “do” Rome, Venice, Berlin, they seem to hardly bother to look at the history all around them. Like so many tourists I’ve seen in Europe myself, they are more interested in taking Selfies.

This first 45 minutes of backstory, is occasionally punctuated with some brief ‘flash-forwards’, with which Eastwood has attempted create a link to a moment happening in their youth. .. or maybe try to tell us everything was leading to this event on the train. One of the young men is still a dedicated Christian, and so there is, at least twice, a bit of unconvincing dialog, about being drawn to something powerful in his destiny. If those things were really said, and felt, the film has failed to show it as anything more than random chance.

In Amsterdam they are even considering not bothering to go to Paris. Are they in their right minds? Some of the dialog is rather lame on this subject too, where they say that various people they’ve talked to say it’s not worth bothering to go there. Are average Americans really this culturally blind and insensitive or is it just the folly of youth, or dare I say it, growing up in one of world’s most parochial nations?

At least I enjoyed a small moment when they were on a bicycle tour of Berlin. The tour guide told them they’d stopped on the location of Hitler’s suicide, at the end of the war. One of the Americans, argues and says he thought Hitler died at his Alpine retreat in the South. The German says that Hitler was right here and it was the Russians that took Berlin, and caused Hitler and Eva Braun to commit suicide, in their underground bunker. He said, “You American’s cannot take credit for everything, in the war.” It is indeed a fact that it was really the Russians who won the war, and they lost eighty men for every one G.I. who died in World War Two. They had been fighting the Germans in the East for four years, when the Americans finally entered the war in only the final year.

The action scenes of the drama in the train are quite a relief after the tedium of the long lead up.It probably would have been better to just make a documentary about the event for television.

Clint Eastwood has made quite a few films recently about Americans at war, going right back to Flags of our Fathers. So it was generous of him to put in the above-mentioned scene in Berlin with that dialog, in a small attempt to balance how he has glorified the US at war. Of course the individual young men and women, their courage, their sacrifices, should be appreciated and forever remembered. But it would be far better if the USA didn’t go to so many wars these days.

However I hasten to say the world was grateful when they finally appeared in the European theatre of war, in 1944, and much earlier in the Pacific, (because they themselves had been attacked at Pearl Harbour.)

The final scenes of the film are the actual media footage of the young men and another of the passengers, being presented with France’s Legion De Honneur medal, by President Hollande, and then a sort of victory parade when they came home to their hometown Sacramento, California.

I went along, I suppose only because I have lived about 4 months in Antwerp, Belgium since 2013, and will be back there for another couple of months very soon. I often use this train line, boarding at Antwerp Station. The spectacular architecture of Antwerp Station‘s building would have been good to show, and this very busy station has a “layer cake” of four levels of lines and platforms, one on top of the other, because it is such a busy point on Europe’s rail transport network.

However, back to the film, my advice is “Don’t bother” to go to it. It’s not as interesting as Paris!
Comments by Cynthia Webb
Copyright Feb 2018
Photo: Courtesy of the Producers