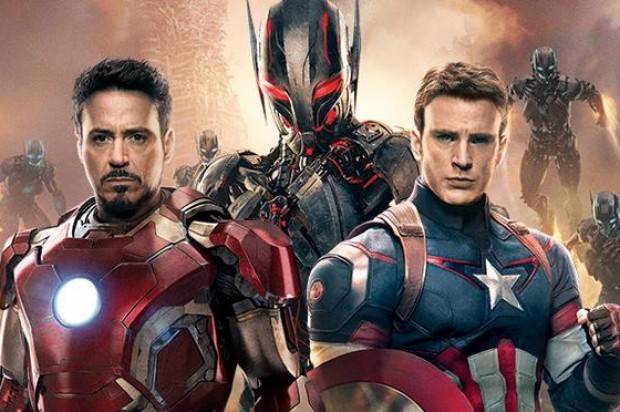 If ‘The Avengers’ was about building a team, ‘Age of Ultron’ is centring itself on tearing them down. Tonally shifting to distance itself from its mammoth 2012 predecessor, though that’s not to say this isn’t without its share of spectacle, the latest entry in the Marvel universe digs a little deeper into the psyche of its titular crew.

The Ultron of the title, a symbol of grand irony if ever there was one, is an artificially intelligent creation spawned from the brilliant mindset of everyone’s favourite narcissistic billionaire Tony Stark (Robert Downey, Jr) aka Iron Man, created as a means to protect mankind and, eventually, render the Avengers obsolete. The fact that he was working on this project in secret with fellow intellect Bruce Banner (Mark Ruffalo) and A.I. assistant Jarvis (voiced by Paul Bettany) should give a good indication that there are still a few teething issues, and, unsurprisingly, Ultron (voiced by James Spader, deliciously sinister in his delivery) evolves to the conclusion that the only way to save mankind is to destroy it.

As the creator (and his co-horts) takes on his creation, who now has an army of replicas to assist in his global domination, writer/director Joss Whedon once again exceeds expectations as he weaves a character-heavy narrative towards a truly overblown (in the best way possible) finale. It’s no small feat juggling so many characters, although thankfully the majority of them are already established enough thanks to their various solo projects, but there’s effortlessness in the manner Whedon pulls it off, ceasing to allow any character to fade into the background. The emphasis Whedon places on his characters allows some wonderful human moments to emerge amongst the chaos with the relationship between Natasha Romanoff / Black Widow (Scarlett Johansson) and Banner, and the surprising all-American family man alter ego Clint Barton / Hawkeye (Jeremy Renner) adopts when he isn’t avenging; the former relationship offering some welcome tender moments for Banner in his Hulk form as Natasha coaxes him back to serenity.

Aside from the nominal villain, there’s a refusal in ‘Age of Ultron’s definition of its character’s motivations pertaining to them either being “good” or “bad”, rather Whedon creates these beings with deep flaws and impulses, characteristics which ultimately tear the group apart from the inside out. As we witness the joviality of them playing Thor’s (Chris Hemsworth) favourite party trick (essentially seeing who is strong, or worthy, enough to lift his mighty hammer) crumble towards the infighting spurred on by Tony’s need to create yet another A.I. to take down Ultron – this plot device allowing long-time voice actor Bettany a chance to be seen (and how!) – the blurred lines between friend and foe comes to a head when European twin-duo Pietro and Wanda Maximoff (Aaron Taylor-Johnson and Elizabeth Olsen), dubbed Quicksilver and Scarlet Witch respectively, assist our trusty Avengers in their plan to defeat Ultron having only tried to destroy them in the precursory moments; his lighting-paced speed and her mind-controlling ability ensuring them as formidable threats, particularly Scarlet Witch as her psychic enhancements prove a thorn in the sides of Captain America (Chris Evans), Black Widow and Thor as she triggers memories for them they no doubt wish to keep buried.

As to be expected each cast member delivers in their assigned heroic role, Downey Jr once again leading, or more correctly funding, the pack with his trademark wit and cocksure attitude, though he appears to be slightly toned down for his latest go-around. Evans possesses the poise and manly elegance of a hero from the yesteryear he continues to pine for, and Hemsworth adds considerable charm and humour to his gallant God. Sidelined considerably from the original, Renner’s role has been improved upon here (perhaps Whedon felt guilty?) with both his backstory and dialogue benefitting; his observation of the fact he causes as much damage as he does with a simple bow and arrow proving a quip highlight. The romance angle between Ruffalo and Johansson works in the actors’ favour with their story adding a real sense of heart to the mayhem, whilst newcomers Johnson and Olsen leave a lasting impression; so much so that at least one of them looks to be sticking around for further Marvel universe outings.

It’s only when ‘Age of Ultron’ comes to matching the dizzying spectacle of its predecessor does it come up short. There’s one hell of a finale be assured, but when looking at the wow factor achieved by Whedon in the original when New York City came under intergalactic attack, you can’t help but feel slightly underwhelmed as there’s nothing that goes beyond our expectations. The Hulk vs. Hulkbuster sequence (the Hulkbuster being an amalgamation of Stark-designed suits intended to be strong enough to take down Hulk should be lose too much control) is a real delight though, and as much as we’ve seen it before, the panoramic-view of the Avenger team in various fighting poses still leaves you exhilarated.

Calling ‘Age of Ultron’ a disappointment isn’t fair as what Whedon achieved with ‘The Avengers’ was unfathomable and the task of repeating that would be near-impossible, so it’s perhaps best that this sequel does distant itself so greatly from the first film. Our heroes have evolved and the complex psychological themes explored here hint at darker times to come, and Whedon is certainly owed credit for turning out another superhero film that does more than just offer aesthetics and thrills. Those looking for a repeat should proceed with caution, but overall ‘Age of Ultron’ is yet another grand addition to a cinematic universe that is, quite simply, marvel-lous.