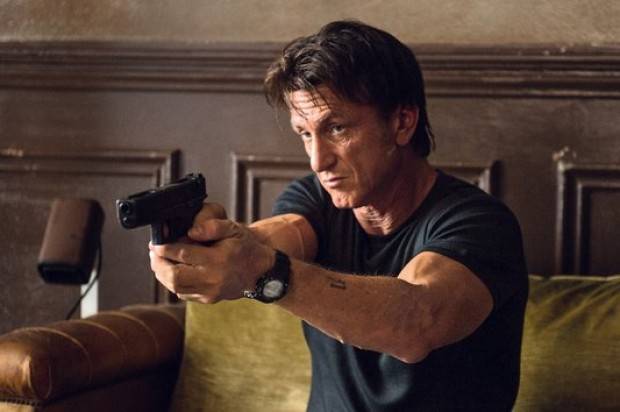 If there’s one thing Sean Penn wants us to know in ‘The Gunman’ it’s that he’s in great shape, and given this he seems to be under the impression that surrounding himself with a decent cast, snagging the director of ‘Taken’, and constantly going shirtless to showcase said shape will make him some kind of action star. How wrong you are Mr. Penn! Whilst the aforementioned ingredients aren’t exactly the problem (the shirtless routine gets old quick though) mashing them together with a script that’s far too convoluted and a seeming amalgamation of (better) action movie clichés doesn’t help proceedings, and making a chemistry-free love triangle the prime focus certainly won’t impress audiences either.

This missed opportunity of a film begins in 2006 when ex-special forces government contractor Jim Terrier (Penn) is assigned with the task of assassinating the Minister of Mining in the Democratic Republic of Congo. Once his task is complete, he must disappear, and with that leave behind his girlfriend Annie (Jasmine Trinca). 8 years pass and Terrier is doing his best to clear his conscience by assisting with providing clean water for an African village – because he’s still a nice guy after all, and this character additive is no doubt a contribution from Penn being on board as co-writer and producer. When a series of men show up to take Jim out, for reasons we assume are connected to the Congo assassination, he manages to escape and globe trot in an attempt to warn the other men he conspired with all those years ago; Felix (Javier Bardem) and Cox (Mark Rylance).

As we wait for either Felix or Cox to reveal themselves as someone more sinister, and I honestly couldn’t tell how the film was intending to treat Felix’s character, it starts to sink in how much of a non-action film ‘The Gunman’ is. As Jim travels to meet Felix and Annie (the two of them now shacked up together) the film decides to dedicate far too much time to this supposed love triangle, and that would all be well and good if we actually cared about any of these characters, or if there was a hint of chemistry between them, but neither Penn or Bardem endear themselves enough, and Trinca doesn’t leave much of an impression that when her character is ultimately placed in peril, I wasn’t fussed on if she survived. The film’s first major action sequence finally arrives at what feels like an hour in, and though it mildly delivers on location being set in a sprawling estate, there’s nothing on-screen we haven’t seen before; and naturally all of the henchman have terrible aim when it comes to targeting Penn, who in turn tries to out-macho them all with countless bicep-flexing aimed gun poses.

With Penn taking himself far too seriously, it’s left up to his support cast to provide the enjoyment, and sadly the best the film can offer (apart from the scene-chewing Bardem) are Idris Elba and Ray Winstone in extended cameo appearances, the duo barely getting 20 minutes screentime between them. Both actors liven up proceedings when involved but Winstone is sidelined for much of the film after an initial introduction, and Elba doesn’t show up until way past the 60-minute mark. It’s an absolute waste of all involved, as there’s so much talent on screen and so much potential in the story, but Penn’s attempt at his own Liam Neeson vehicle is void of any humour or fun that the convoluted story just comes across as dull and flat, and without any sort of nonsensical action to fill in the blanks, we’re left with a sloppy story that doesn’t muster up enough interest to keep us invested.

Penn is a great actor, and a great scriptwriter (see ‘Into the Wild’ or ‘The Pledge’ for proof of better work), but if he’s going to take on a project so mainstream, he needs to let someone else take the wheel and inject the kind of humour and personality these films need to stay afloat. I’ll refrain from arguing about the irony of Penn’s anti-gun stance when looking at something titled ‘The Gunman’, but if he intends in any way to re-visit this category, he’s better off taking his ego out of the equation and surrendering to the genre.