Cockney Oliver Twist raft law skating twist by Caroline Russo | on May 3, 2021 | 0 comments | in Film Release & Reviews | Like it 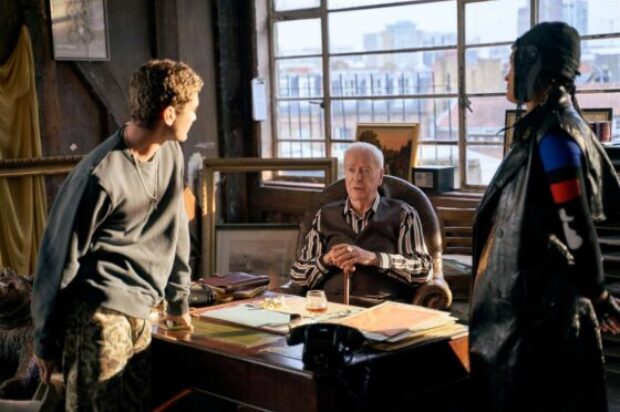 Twist is a Dickens’ classic brought thrillingly up to date in the teeming heartland of modern London, where a group of street smart young hustlers plan the heist of the century for the ultimate payday.

The film features an all-star British cast including two-time Academy Award winner Sir Michael Caine (The Dark Knight) as Fagin, who is showing his age in this film but is priceless to watch and plays to what role he is under here.

Lena Headey (Game of Thrones) as Sikes, Rita Ora (50 Shades of Grey) plays Dodge, Franz Drameh (Legends of Tomorrow) as Batesey, Sophie Simnett (Daybreak) as Red and introducing Raff Law in the title role of Twist and here you see he is a chip off the block as to his dad “Jude Law” in looks and talent and you can’t keep your eyes off him and this is his first screen role which should now bring him to better casting films.

Raff Law, a 23-year-old musician, who immediately took to the material, as he recalls. ‘I was hooked on the idea of a modern Oliver Twist straight away. The essence of the story is the same: it’s about a young boy who is crying out for family and for people to love him. It’s his journey as he learns to trust the people around him.’
The filmmakers saw Law’s potential and offered him his first acting role as the lead, title character. Despite his lack of professional experience, Law impressed everyone with his acting skills.

‘There was a lot of expectation and pressure on him, but he lived and breathed this role, so we all had great confidence in him. He maintained that discipline and awareness of his character throughout the entire shoot,’ Owen recalls.

With that said the film lacks character building for him in the first essence of it and countless vision of him skating. The film does drag out and fails to deliver the writing is basic, which is a shame but on positive it will be noted for Raff Law!

Twist is directed by Martin Owen (The Intergalactic Adventures of Max Cloud) also stars David Walliams (After Ever After) and Noel Clarke (Bulletproof). The film is produced by Unstoppable Film and TV, Pure Grass Films, FAE Film and Television, and is co-produced by Sky and Red Bull Media House. It has been written by John Wrathall (The Liability) and Sally Collett.