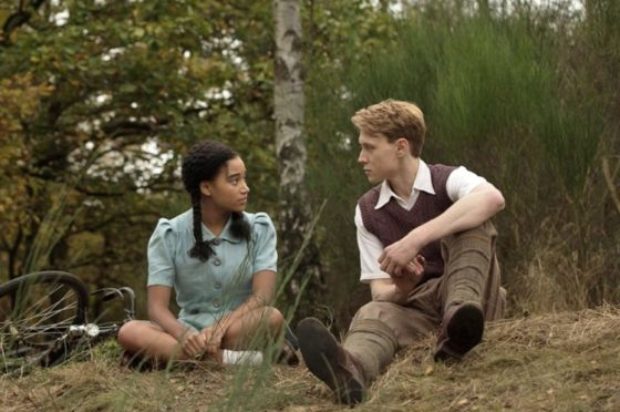 ‘Where Hands Touch’, written and directed by Amma Asante is an eye opening look and the landscape of World War 2 as well as how people of varying demographics within Germany related with one another.

‘Where Hands Touch’ is an engaging war set survival love story about a black German girl named Leyna (played by Amanda Stenberg) who meets a member of Hitler Youth named Lutz (played by George Mackay). Together, this unlikely pair from two very different sides of the war, slowly fall in love with one another, ignoring the clearly huge obstacles of their time that are in their way including political stances, race, parents and the war itself. The film shows how the couple defy these obstacles in order to know each other on a more personal level and show one another how much they mean to each other.

This is director Amma Asante‘s fourth film, a lot of which touch on race relations and one other even shares the backdrop of the Second World War. It is clear that as both the writer and director of this film Amma had a clear message she wanted to send and believed that the horrific atmosphere of the war would help present that message. It is clear by the way the dialog, themes and the environment itself that Asante had a clear vision of what she wanted the world to be whilst also keeping it authentic feeling.

This film is filled with seasoned actors who have been in man of the most recognised properties of the last few decades including ‘The Hunger Games’, ‘Limitless’, ‘Doctor Who’ and ‘Sucker Punch’. Due to the backdrop of the film, the actors have shown variety in comparison to the other roles they have taken on. The only one who did not show something she hadn’t shown before was Amanda Stenberg who previously played Rue in ‘The Hunger Games’ and in that case, it was good to see Stenberg expand on the character type she started in that movie. The most radical change from one role to another is that if Christopher Eccleston who is most remembered for being the 9th Doctor who was a lot more caring than his character in this. Even in comparison to his character in 28 Days Later that shares similarities in attitude, this character goes one step further down the path of being selfish and uncaring. Another drastic departure from previous work is Abbie Cornish’s role. Cornish has previously played a badass in ‘Sucker Punch’ and a girlfriend who is dragged into high energy situations in ‘Limitless’ but her role in this film is stripped down and shows Cornish’s true talent and range as an actress.

‘Where Hands Touch’ Is an engaging, heart-wrenching story of love with many obstacles. I highly recommend this to anyone who loves war films and romance films as it greatly captures both genres brilliantly.