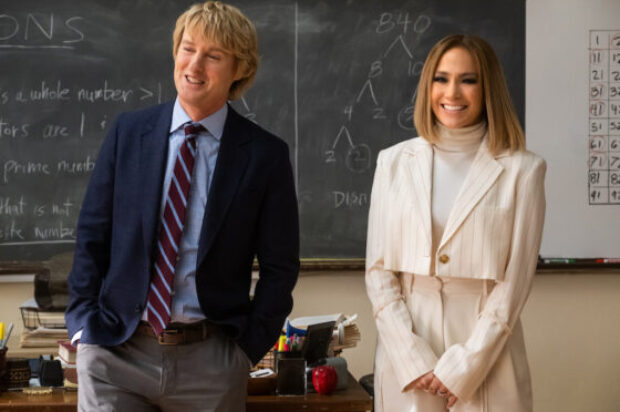 MARRY ME
IN CINEMAS 14TH FEBUARY

Packed with original songs by JENNIFER LOPEZ (Hustlers, The Boy Next Door) and global Latin music star MALUMA, Marry Me stars Lopez as musical superstar Kat Valdez and OWEN WILSON (Wedding Crashers, Wonder) as Charlie Gilbert, a math teacher—total strangers who agree to marry and then get to know each other. An unlikely romance about two different people searching for something real in a world where value is based on likes and followers, Marry Me is a modern love story about celebrity, marriage and social media.

Kat Valdez (Lopez) is half of the sexiest celebrity power couple on Earth with hot new music supernova Bastian (Maluma, in his feature-film debut). As Kat and Bastian’s inescapable hit single, “Marry Me,” climbs the charts, they are about to be wed before an audience of their fans in a ceremony that will be streamed across multiple platforms.
Divorced high-school math teacher Charlie Gilbert (Wilson) has been dragged to the concert by his daughter Lou (CHLOE COLEMAN, HBO’s Big Little Lies) and his best friend Parker (SARAH SILVERMAN, Hulu’s I Love You, America). When Kat learns, seconds before the ceremony, that Bastian has cheated on her, her life turns left as she has a meltdown on stage, questioning love, truth and loyalty. As her gossamer world falls away, she locks eyes with a stranger—a face in the crowd.
If what you know lets you down, then perhaps what you don’t know is the answer, and so, in a moment of inspired insanity, Kat chooses to marry Charlie. What begins as an impulsive reaction evolves into an unexpected romance. But as forces conspire to separate them, the universal question arises: Can two people from such different worlds bridge the gulf between them and build a place where they both belong?
The film also stars JOHN BRADLEY (Game of Thrones) as Kat’s manager, Colin, and comedian MICHELLE BUTEAU (Michelle Buteau: Welcome to Buteaupia) as Kat’s assistant, Melissa.
Marry Me is directed by KAT COIRO (Dead to Me, It’s Always Sunny in Philadelphia, upcoming She-Hulk) from a screenplay by JOHN ROGERS (The Librarians) & TAMI SAGHER (NBC’s 30 Rock) and HARPER DILL (The Mick) based on the graphic novel by BOBBY CROSBY.

The film is produced by JENNIFER LOPEZ, with ELAINE GOLDSMITH-THOMAS (Hustlers, Maid in Manhattan) who had the idea for Marry Me seven years ago, she immediately saw its potential as a fresh, relevant romance for our modern age:

Having worked with Jennifer Lopez for years, beginning with 2002’s Maid in Manhattan, Goldsmith-Thomas saw an opportunity to allow audiences backstage access to the machinery and reality of modern fame. “To make a movie about modern celebrity—to juxtapose who the public thinks a celebrity is with who she actually is as a person—interested me,” Goldsmith-Thomas says. “Being partnered with one of the most famous people in the world, and knowing her differently than anyone else knows her, is an honor and sometimes frustrating,” on occasions when Lopez is mischaracterized, misrepresented or misunderstood. “I know Jennifer as somebody who likes to sit around in sweats and eat popcorn and watch movies,” Goldsmith-Thomas says. “So, this film allows audiences to discover the human behind the image. It was a delicious opportunity.” 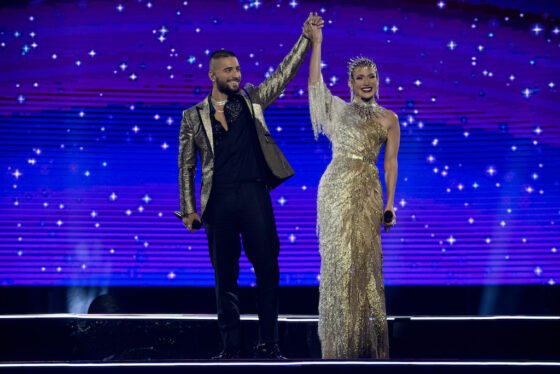 Jennifer Lopez immediately connected with Kat and the film’s themes on multiple levels. “I understand this life,” Lopez says. “The film is literally going behind the veil of what it’s like to be a celebrity. “There is no filler in this movie; everything has a real purpose and real fun to it,” Lopez says. “It’s a musical, so I’m taking romantic comedies, which I love, and my performing and my dancing and my singing, and putting them both together for the first time. That’s been exciting for all of us.” 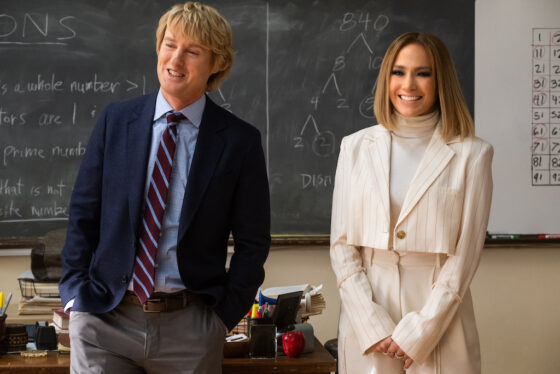 Owen Wilson and JLO back on screen for the first time since Anaconda in 1997. The pairing was instant movie magic, director Kat Coiro says. “From the first moment, Owen and Jennifer had this chemistry that was unexpected,” Corio says. “They’re an unlikely couple, and yet they work wonderfully. It was important in casting Charlie that I had somebody who was not only nice but also had a distinct sense of self. He’s not in it for the fame, money or beauty. He’s in it because he sees something in Kat, and he has a genuine connection to her.”

The character of Charlie also is the audience’s entre into both the sometimes-bizarro world of celebrity life and the less glamorous reality behind it. “There’s a peeling back of the curtain and seeing how hard and lonely that world can be,” Coiro says. “You can be surrounded and drug along by other people’s expectations of what they want from you. And sometimes you just want to sit on the floor and eat pizza.”

Like Lopez, Wilson liked that the film upends audience expectations of what being famous is really like. “People think, ‘how could this person ever have any problems or ever feel lonely or defeated?’” Wilson says. “But of course, people are pretty much the same. When you see these scenes where Kat’s devastated by what happens with Bastian—and where she’s struggling to get some validation—it’s moving.”
Although Wilson is famous himself, of course, he leads a quieter public life than many of his peers and so was able to tap into Charlie’s worldview and personality. “There is some overlap between Charlie and me,” Wilson says. “I’m not on social media and I’ve never gotten into it. And it was easy to relate to Charlie’s unease with always being on camera.” The biggest challenge was mastering the subject Charlie teaches. “I was an English major, and math was never my thing,” Wilson says, laughing. “So, I had to do some real acting to convince people that when I talk about ‘find the prime factorization of whatever’ it sounds believable.”

This is an engaging and enjoyable film that hits the beat’ and loved watching Lopez and Wilson on screen. In fact, I really liked it and it was a predictable love story but the music is cool and looking at pop star image and all the clothes and dancing is what makes this one work well and sure it will attract a good audience. Plus it’s just a good feel-good movie.
3 stars
Caroline Russo