Film TV GC INDIE Event kicks off in with a Bang 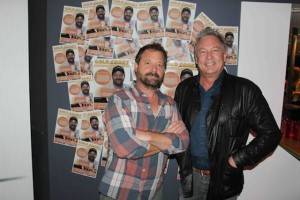 THE GOLD COAST INDIE FILM AND TELEVISION NETWORK KICKS OFF 2013 WITH A BANG
BY HUSH HUSH BIZ REPORTER, SAMANTHA MILNE

The Basement of the Arts Centre Gold Coast was packed wall-to-wall and buzzing last night for the 2013 Opening Night of the Gold Coast Indie Film and Television Network. It was a spectacular social event with a record turnout; including special guest for the night, Alister Grierson, award-winning director of Kokoda and Sanctum; supporting guest, upcoming writer and director, Mack Lindon (and many of his cast and crew); award-winning Aussie actor Martin Sacks, award-winning cinematographer Nino Martinetti , production designer Nicholas McCallum, Dr. Simon Hunter of the New York Film Academy, as well as prominent members of the Gold Coast City Council. Some of the guests had even flown in from Melbourne and Sydney just to attend.

The stage events kicked off (and later concluded) with an original performance by Chick’n’Stu, an eclectic local band that frequents the Queensland gigs and corporate shows circuit. Lead vocalist, Lauren Napier, dazzled the crowd with her rich, soulful voice and stage presence. Next up was Adam Harris, an aspiring filmmaker whose recent teaser trailer, That Day, has had phenomenal celebrity endorsement via online social media. David Arquette particularly took interest, and even put Adam in touch with an esteemed producer in the US. Adam screened the teaser, and spoke humbly of its success and potential as a feature film.

Mack Lindon spoke next, and everyone loved him. He screened the teaser trailer for his upcoming film, Rise of the Underdog, which is based on an amazing true Australian story. His story, as he revealed last night. Mack’s attitude was nothing short of inspiring as he briefly relived it for the audience: casual, jokey, and modest. He then showed an exclusive behind-the-scenes glimpse at the making of the teaser trailer, and later auctioned off a signed poster (which sold for more than $1000) to raise funding for the film.

Then came the night’s special guest, Alister Grierson. Alister spoke of his experience in the industry and how he grew to be as successful as he is today. The opinions, information, and anecdotes he had to share were stimulating, with some good laughs along the way. He gave incredible, in-depth insight into the making of Sanctum, Australia’s first 3D film; and screened the first film he ever made – a hilarious three-minute production entitled Bomb. A quick questions-and-answers session wrapped up his presentation.

The night concluded with thank-yous and congratulations, lucky door prizes, and drinks; bleeding into the Rise of the Underdog wrap party. Altogether it was a fabulous affair, fun-filled and frivolous. I’m sure I’m not alone in saying I look forward to the Network’s next event, and that everyone involved should be proud.

Check out the Trailer of RISE OF THE UNDERDOG 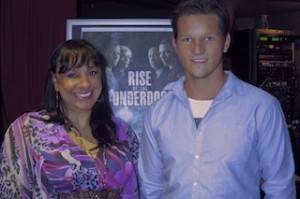