2020 Australia DINGDONGIMGAY entertainment LGBTQI+ WINTERGARDENPICTURES by Caroline Russo | on July 22, 2020 | 0 comments | in Entertainment | Like it Wednesday 22 July, 2020 – Wintergarden Pictures is today launching the first season of new queer- and sex-positive digital comedy series, Ding Dong I’m Gay, based on the pilot series of the same name with over 2.9 million views. The first two episodes of Season One are now available to watch for free on the official YouTube channel, with subsequent episodes to be released weekly. Produced with principal production investment from Screen Australia and financed with support from Screen NSW, the 6-part digital series is created by Tim Spencer (Oasis, Cherry Season) and jointly directed by Joshua Longhurst (Oasis, Cherry Season) and Sarah Bishop (Skit Box, Yolo: Crystal Fantasy, Wham Bam Thank You Ma’am).

Also releasing today is the music video for the Ding Dong I’m Gay original song, Instaboy, giving audiences deeper insight into one of the hilarious characters from Episode 2. Tommy Misa stars as ‘Anton’ with music and lyrics performed by composer James Yeremeyev.

Feeding a strong appetite for short-form queer comedy and high demand for diversity on screens, Ding Dong I’m Gay sets a boundary-pushing comedic lens on issues of isolation, connection and social pressures in the LGBTQIA+ community. Seeking to increase representation and positive stories, this unique comedy was made by and for members of the LGBTQIA+ community and its allies. Over six episodes, Season One follows a high-achieving neurotic, Cameron, as he seeks to guide his naive, newly-out country cousin, Toby, through the urban gay experience. But when Toby flourishes, Cameron’s insecurities blind him to the genuine connection they share. Screen Australia Senior Online Investment Manager Lee Naimo says, “Ding Dong I’m Gay is a clever, well-paced comedy from an exciting creative team spearheaded by creator Tim Spencer. The pilot very quickly struck a chord with audiences online and the full season is set to deliver more outrageous comedy while delving further into the relationships of these relatable characters, in a celebration of the LGBTQI+ community.”

Head of Screen NSW Grainne Brunsdon adds, “We’re thrilled to be involved in bringing this highly anticipated web series to life through Wintergarden Pictures. Screen NSW is committed to supporting diverse Australian stories and as a digital show premiering on YouTube, Ding Dong I’m Gay will reach a wide, global audience and contribute to the further visibility of queer stories on our screens. I can’t wait for viewers to laugh and connect with the characters at a time when it is most needed, in this heart-warming and hilarious show.”

Mark O’Toole (Black Comedy) is Executive Producer and Script Editor on Ding Dong I’m Gay Season One, which was also developed with the assistance of writer Benjamin Law (The Family Law).

Creator, writer, producer and star Tim Spencer says, “The first full season of Ding Dong I’m Gay is here! There have been a series of crazy challenges to bring this story to life and I couldn’t be prouder of the team who made it. I hope that our story of two characters finding a sense of connection and belonging in a lonely city resonates with a big audience. I’m excited to release the series, but I’m also quietly panicking about being naked on the internet.” 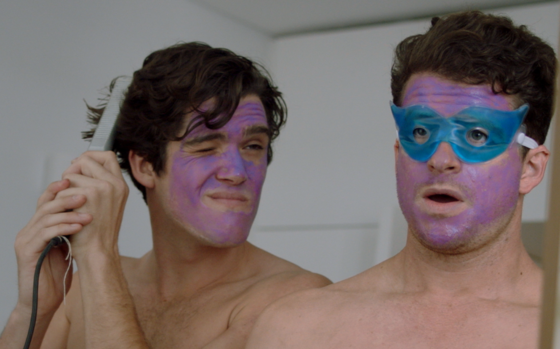 Director and producer Joshua Longhurst says, “I wish I could tell my teen self that I would grow up to help make this show – although, I don’t think I’d believe me! I love that this series exists forever, and I’m incredibly grateful to the talented people who made it possible.”

Director Sarah Bishop adds, “Finally a FUN reason to stay inside. Ding Dong I’m Gay is best viewed with a wine or cocktail and your best friend – socially distanced of course.”

Synopsis: Six years after coming out and moving to Sydney, Cameron’s (Tim Spencer) dreams of elite parties and mini-breaks with jaw-lined boyfriends have flatlined. Nevertheless, he is determined to pin down his almost-boyfriend, Jack (Rupert Raineri), and prove to his newly-out cousin, Toby (Brayden Dalmazzone), that he is an all-knowing gay guru. From how to bottom to hook-up strategy, Cameron mentors his country cousin through the urban gay experience. Toby’s naive country charm makes him an instant hit, but Cameron’s insecurities soon threaten to drive a wedge between them.

Episodes 1 & 2 of Ding Dong I’m Gay Season One and Instaboy are now available to watch for free on the official YouTube channel. Episodes 3-6 will be released weekly on Wednesdays, with the music video for a second original song, It’s Tops to Bottom, accompanying the release of the season finale on August 19. The pilot series is available now on the official YouTube channel.