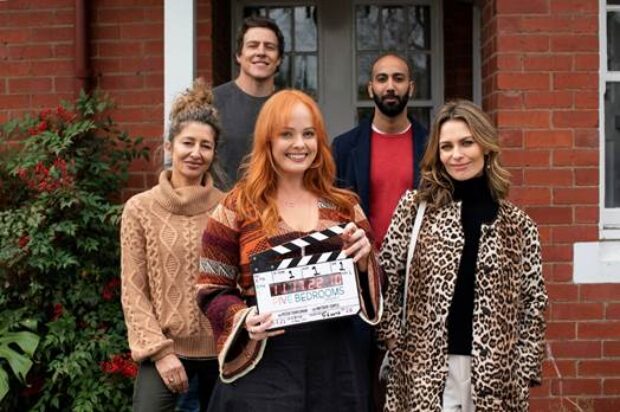 The superb Five Bedrooms ensemble cast have found their home on Paramount+, and they have no plans to return the key.

There’s so much more to come for our flawed, disparate housemates; Liz (Kat Stewart), Ben (Stephen Peacocke), Heather (Doris Younane), Harry (Roy Joseph) and Ainsley (Katie Robertson), and we are proud to announce that season three of Five Bedrooms, is currently in production.

Five Bedrooms creator and writer Michael Lucas said: “We are so ridiculously invested in these five characters, we simply can’t stop imagining funny, fraught, tragic, joyful situations to put them in. So, we are beyond delighted that we’ve been given a third season to run wild with them again, and we’re delighted to report that the cast have come out of the gates in best-ever form!”

Doris Younane said: “I’ve been in the industry for 35 years and these are the best scripts I’ve read. There’s so much love in season three, so much heart, and the comedy comes from the drama; it’s beautifully positioned. For me, this is great love and I want it to never stop. I’d like to be in a nursing home still shooting Five Bedrooms.”

Five Bedrooms has commenced filming in Melbourne and is produced by Hoodlum Entertainment for Paramount+. Developed and produced with support from Film Victoria, and assistance from Screen Australia.