c3west food fight liverpool city council museum of contemporary art by Caroline Russo | on April 1, 2016 | 0 comments | in Lifestyle | Like it 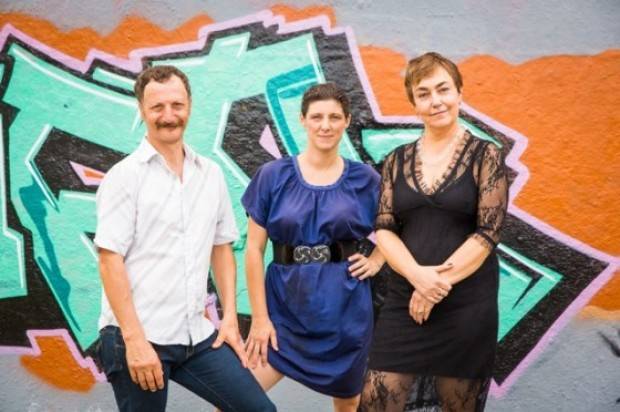 The Museum of Contemporary Art Australia (MCA), Liverpool City Council and Casula Powerhouse Arts Centre are inviting local community champions and food heroes to take part in a major artist-led project: ‘FOOD FIGHT – the Battle for food Security’. The project takes a socially engaged approach to raising awareness and stimulating conversations about a hidden issue: food security and access to affordable, fresh and nutritious food for everyone in Liverpool and South Western Sydney. It will include a series of community engagement workshops and culminate in a major public event in Bigge Park, Liverpool, on Saturday 30 April (5-8pm).

The project, which is part of the MCA’s C3West program, is led by Sydney artists Diego Bonetto and Branch Nebula (Lee Wilson and Mirabelle Wouters), in collaboration with designer Genevieve Murray of Future Method Studio.

‘FOOD FIGHT – the Battle for food Security’ has been developed in partnership with Liverpool City Council and builds on the Council’s long-standing commitment to encourage healthy lifestyles, through initiatives such as the “Healthy Living in Liverpool Cookbook” or the seminal “Right to Food” conference which took place in October 2014, involving a range of local and national policy makers, academics, health promoters and community development workers.

Anne Loxley, Senior Curator for C3West at the MCA, explains: “C3West is based on the idea that contemporary artists can bring unique value to situations beyond the gallery. We create contexts in which artists are placed at the core of projects that address social issues, and then work strategically with local communities, businesses and arts partners across Western Sydney to give these issues a voice.”

“When we started researching the FOOD FIGHT project and looking at data,” Loxley continues, “it was really sobering to realise that the issue of food security is in everyone’s backyard… For instance, did you know that:

· Nearly one million Australian kids go without breakfast or dinner every day
· Two million Australians rely on food relief every year
· Australians throw out one of every five shopping bags
· Foodbank has supplied 430,000 meals over the last 12 months to the most vulnerable members within the Liverpool area, through a network of 20+ frontline agencies.”

As part of the project development, the artists will conduct a series of community engagement workshops with local partners such as the Liverpool Girls High School, Inspire Community Services and the Liverpool Community Kitchen, Food Bank, OzHarvest and Youth Food Movement Australia – to name a few.

Tony Gatt, Business Development Manager at Foodbank NSW, comments: “The issue of food security barely raises an eyebrow in our society. Yet it is an issue which continues to worsen, with the rise of the casualised labour force and the ‘working poor’ – people who have a job and a roof over their head, but who simply do not make enough money to feed their families adequately. In NSW alone, over 90,000 people rely on Foodbank’s emergency food relief each month.”

“This is why initiatives such as ‘FOOD FIGHT – the Battle for food Security’ are so important: anything we can do collectively to break down the veil of ignorance about food security, build empathy and address the stigma associated with food relief is a step in the right direction,” he adds.

The event itself will take place in Bigge Park, Liverpool, on Saturday 30 April (5-8pm). It will include a night market with local and healthy food stalls, live cooking shows, a DJ set, soap box performances by ‘Food Warriors’, nutrition chats with roaming ‘Food Security Guards’ and a dramatic finale involving a short artist-choreographed food fight and a 100-seat al-fresco banquet designed by the artists and cooked by local food heroes from a diverse range of cultural backgrounds – giving policy makers, stakeholders, recipients of food relief and community champions a chance to engage in meaningful dialogue.

Artist Diego Bonetto, one of the creative minds behind this project, concludes: “Our aim with this FOOD FIGHT project is twofold: we want to create a fun and engaging event that serves as a wake-up call and conversation starter on a hidden issue; whilst also celebrating the community champions and everyday heroes who fight for food security in the local area, one meal at a time.”

HOW TO GET INVOLVED?

1. JOIN THE EVENT AT BIGGE PARK, LIVERPOOL ON 30 APRIL as we bring the park to life with a spectacular performance featuring food stalls, live cooking shows with local heroes, a DJ set, and conclude with a dramatic finale.
2. STEP IN THE RING Are you a community champion passionate about food security? A top cook with treasured recipes handed down from one generation to the next? Keen to fling a flan? Raise your hand to be involved.
3. GET SOCIAL Register now at foodfight.org.au or contact us at [email protected] or 02 9245 2466. #foodfightliverpool