At the Australian Small Winemakers Show held over the past week on the Granite Belt, the 2012 Old Vine Shiraz produced by a former Sunshine Coast couple under their new winery name Savina Lane Wines, took out the two top awards for Queensland wines and missed the national Champion Red Wine award by only half a point. (That honour went to Mandoon Estate of W.A.).

Chief Judge Mike Farmilo from McLaren Vale spoke to Savina Lane’s owners, Brad and Cheryl Hutchings, after the presentation saying, “You don’t know how close you were to winning the national award.”

“The really poignant thing about winning the Dick De Luca award is that the gnarled old dry-grown vines that produced the fruit for our Old Vine Shiraz, came from cuttings taken from Dick De Luca’s own vineyard more than 40 years ago. It is a great honour receiving this award for our first vintage,” said Cheryl Hutchings. 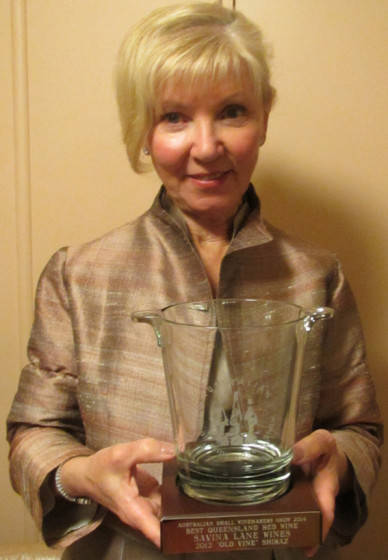 The Dick De Luca Memorial Trophy was sponsored by the De Luca’s family, (Mr De Luca was a pioneer of the wine industry on the Granite Belt with a special interest in shiraz vines).

The Australian Small Winemakers Show, originally established in 1987, has grown to be the most prestigious wine show for small winemakers in Australia and New Zealand and one of the fastest growing shows on the annual wine circuit. It is open to wineries that process less than 500 tonnes of wine grapes annually.

Of the 241 wineries from every State, the ACT and New Zealand that entered wines in 2014, only 10% were from Queensland, however Queensland wines won around 15% of the gold medals, 17% of the silver medals and 12% of the bronzes. The Public Tasting of the more than 1300 wines entered in the Show, is to be held on Saturday 25th October.

The Hutchings moved from Buderim to the vineyard in March 2012. “We faced a perilous learning curve almost immediately with the vines ready for harvest,” says Brad Hutchings, “but we knew that with expert help, which we had in huge amounts from renowned winemaker Mike Hayes and other colleagues in the Granite Belt wine industry, and my experience as an agronomist, we could produce quality wine.”

Brad and Cheryl Hutchings spent 30 years on the Sunshine Coast and are known for their involvement in establishing Underwater World, as well as their advertising agency, Lucas de Malliac. Brad Hutchings is also well-known as a consultant to agriculture in the region. A new cellar door at Savina Lane Wines is expected to open early 2015.