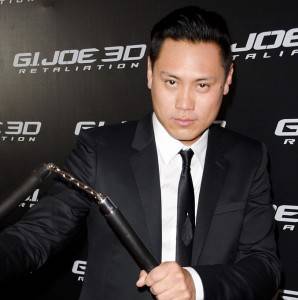 A follow-up to the 2009 blockbuster ‘G.I. Joe: The Rise of Cobra’, which grossed over $300 million worldwide, ‘G.I. Joe: Retaliation’ is one of the year’s most hotly anticipated theatrical events.  Set for release in Australian cinemas on March 28th, the film sees the Joes not only fighting their mortal enemy Cobra, but contending with threats from within the government that jeopardises their existence.  Channing Tatum reprises his role as sergeant Duke with Bruce Willis and Dwayne ‘The Rock’ Johnson joining the crew for what promises to be a non-stop action thrill ride.

Overseeing the action is director Jon M. Chu, one of the most versatile, original and technologically innovative filmmakers working today.  Flying into Sydney to screen the film for anxious fans, Hush Hush Biz entertainment film writer Peter Gray caught up with the director to talk all things Joe.

Are you enjoying Australia?

I am, the weather is beautiful, little rain last night, but it’s great here and the people…the fans are amazing!

So have you screened the film for an audience?

Yeah, cause I understand the film was meant to come out last year, and it was delayed…Was that for the 3D conversion?

It was delayed yeah, we just thought we could make it better with 3D.  We sat down with Paramount and they gave us a spot and ultimately it was up to them and they gave us that opportunity so we went with it.  We feel that there was a demand for 3D and it looks so much better in 3D…we were able to bring the adventure to the audience more.

I saw the film through the week and it looks incredible, almost as if it was made for 3D.  Some post-conversions don’t look as convincing, so I was impressed with its look.

Thank you, yeah it was a tough process, an emotional process but also the most fun.  But the people that worked in that aspect of the film were an absolute blessing…every single frame had to be looked at.

Your background is in more dance-oriented films like ‘Step Up 2’ and ‘Step Up 3’, how did the opportunity for ‘G.I. Joe: Retaliation’ come about?

I was working with Paramount on the Justin (Bieber) movie (‘Never Say Never’) and they presented it to me, and I love fairytales and working with heroes and villains so it was a real honour to be considered cause the G.I. Joe name is such a great property.  I played with the toys growing up, so I had a tonne of ideas of what to work with.

The film really does have that action feel, you know it’s balls-to-the-wall, over-the-top, outlandish…

Exactly, you know its part 007, part western, it has these random ninja scenes and military scenes, it is balls-to-the-wall and it doesn’t apologise but it’s got to have a sense of humour about it.  And finding that balance, and how far we could go, was tricky and there was a constant discovery of how to define it.

On this film you’re working with two of the biggest action stars of the genre in The Rock and Bruce Willis, what was it like working with them, was it hard to contain them?

(Laughing) well you don’t contain Dwayne (Johnson) or Bruce! But they were so ready for it…it was just shoot, shoot, shoot.  And for my first action movie to work with the icon that is The Rock and the legend that is Bruce Willis, it was like an action class in directing, they became like my teachers.  But everyone contributed, and they (Bruce & Dwayne) never came at me, they trusted me and they had a sense of humour about themselves, you know you have to…they understood the film.

When you first signed on, were they already attached?

No, nobody was attached and it was a case of sitting down and seeing who do we want, who would redefine the ‘Joe’ name and those were the two names that came up.  And luckily they said yes.

You worked with Channing Tatum a few years ago on ‘Step Up 2’, what was it like to work with him again? Has he changed in those years now that he’s a bigger star?

You know Channing hasn’t changed a bit, he’s still the nicest guy…a class act.  He’s the nicest guy on set, you know he opens the door for everyone.  I remember when it was my birthday on set, and they brought the cake out and sang happy birthday and all that, and I was too distracted with something else and no one cut the cake, and I turn around and there’s Channing cutting the cake for everyone.

So what do you have lined up next?

At the moment I’ve got ‘Masters of the Universe’ with Sony, and we are in very early stages of that, just playing around with what we can do.

I read somewhere that you like to incorporate dance in your films where possible, is that true?

It’s not so much dance, as it is movement.  You know movement can tell so many stories, and tell so much more about a character so there was a very specific way we had characters like that of Dwayne’s move.  You know there’s a scene in the film that’s about 9 minutes long where there’s no dialogue, so having no definable words it’s a necessity to be able to convey emotion.  And for future projects, I look at is a having a tool to work with on my tool bet.

The scene you mentioned about having no dialogue, is the scene in the mountain tops where the character of Stormshadow is being transported via a zip line, was there a lot of green screen used or was it on an actual set?

It was a combination of both, and this wasn’t just something that took a few weeks to shoot, this was months.  We took them up to Whistler in the freezing cold wearing nothing but these skin-tight outfits and you know the air is thinner there, so they couldn’t breathe that well…it was a lot of logistics to get this done.  And then what was shot there dictated what we had to do with the green screen, probably the biggest green screen I’ve ever seen, and we built a rock to film some stuff on to fill in the gaps if need be.

Because that scene was one scene in particular where the 3D was utilised so well, it seems like it was meant to be in 3D, were there any effects or scenes that were re-shot?

There was nothing! No reshoots, I might have extended a shot or two when we learnt we were going back for the 3D, but I think working on two previous 3D films, maybe there were particular scenes I shot in a certain way that seemed to fit the 3D…using depth as a language.  You know there were shots of long hallways that seemed perfect for 3D, everything just seemed right.  And the scene with the fireflies, that was already in there…the attention to detail was impeccable.

Having worked on this one, do you think you’ll be back for part 3 or is it too soon to tell?

You know if the fans go see it, it’d be an honour to come back and do it again.  G.I. Joe is a brand I love.

Any characters in the G.I. Joe universe that you would like to particularly work with?

Oh the G.I. Joe universe is huge, there’s so many.  I loved being able to reinvent characters like Snake Eyes and Roadblock, and when we were filming this I kept thinking, “Oh wouldn’t it be cool to have this and have that”…and I don’t want to say too much (laughs) cause I want to surprise people.

Well I hope the film does well for you, and I think it’s better than the first, and that’s not me being biased, but I think you have a big hit on your hands.

Well thank you very much, glad you enjoyed it, and hope everyone else does too.

‘G.I. Joe: Retaliation’ opens in RealD 3D and Digital 3D on March 28th 2013 in Australian cinemas.  Check back soon for a review  on Hush Hush Biz.