George Bar & Bistro is Getting ready to Open 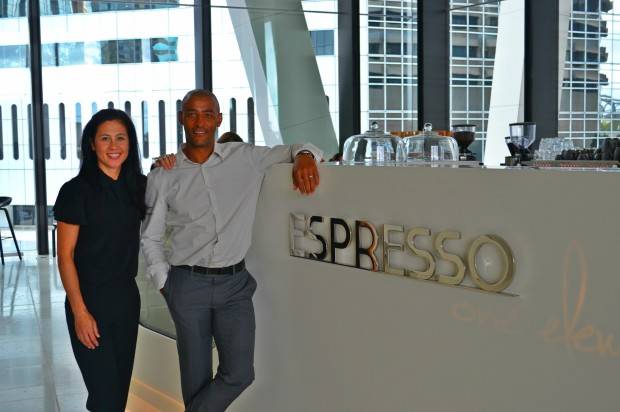 In great news for the Brisbane scene, the marquee dining space and coffee offer at ONE ONE ONE Eagle Street has been leased to GG espresso, the company owned and operated by George and Erica Gregan. The premium office tower, ONE ONE ONE Eagle Street, is jointly owned by The GPT Group and GPT Wholesale Office Fund (GWOF). (interviews and images available on request)

Known for one of the most famous try saving tackles in the history of Rugby Union, when he brought down Jeff Wilson and robbed the All Blacks of a 1994 Bledisloe Cup win, George Gregan and his wife Erica have been quietly building their espresso, wine and bistro company since 1998. The passion they pour into their business and into their customers is well known, and highly respected.

Sydney based with myriad Brisbane connections and a passion for the city, GG espresso already operate 20 espresso bars and wine bars and most recently opened The Local, a wine bar and bistro at Liberty Place, 161 Castlereagh Street, Sydney, a 60,000sqm premium office building also owned by GPT and with a similar tenant profile to ONE ONE ONE Eagle Street.

The Gregans have leased both spaces at ONE ONE ONE Eagle Street – the café on the Mezzanine level which is 77sqm, and the 275sqm Bistro on the Ground Floor, both for a five year term.

GG espresso opened the café earlier this week, serving Allpress Coffee to hundreds of returning workers, with no sign of first-day nerves whatsoever.

Ground floor will become home to The George Bar & Bistro – a bistro experience, which will open early through to late Monday to Friday, with the aim to become a ‘local’ for breakfast, lunch and dinners and a place for shared plates and wines in the afternoon, meetings and more. Their priority is to deliver their bistro style menu and wine list at affordable prices, again a commitment for which they are well known.

This is the Gregans first foray into the Brisbane market, a city they have been eyeing for years.

“Brisbane is a city that is very dear to our hearts,” said Erica. “We have an incredible base of friends here and have been waiting for the right space and opportunity to become available – ONE ONE ONE Eagle is definitely the right fit for us,” she said. “We have a huge connection to Brisbane through our network of friends and business colleagues, it is also the city that’s home to George’s favourite ground in Suncorp Stadium!”

“Our dining experience is bistro-based and we encourage shared wine and food experiences. The Brisbane dining scene is so exciting, with Brisbane customers truly discerning; we can’t wait to open and share our menus with the city,” she said.

“Our aim is for The George to become an extension of ONE ONE ONE Eagle Street, where tenants and city workers and residents gather.”

The George Bar & Bistro is expected to open early February 2014. While the current fit out will stay, the Gregans intend to introduce their own touches – more communal areas, high tables and welcoming elements. The George will have up to 25 wines by the glass, and the ability to ‘save’ bottles that are opened and left unfinished!

GPT Wholesale Office Fund Manager Martin Ritchie, said: “We are very pleased to extend our relationship with GG espresso following great success at Liberty Place in Sydney, where it’s a very popular ‘local’ wine bar and bistro. We expect the Gregans will be warmly welcomed in ONE ONE ONE Eagle”.

The Gregans take over the two spaces previously tenanted by Brisbane restaurateur Philip Johnson. His operation closed toward the end of last year.