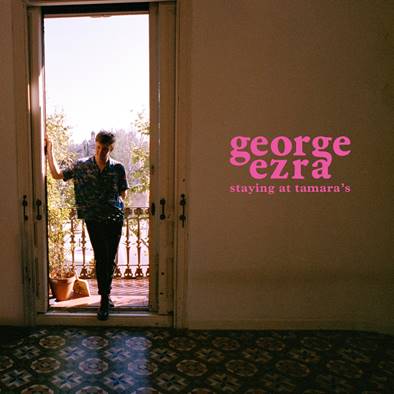 George Ezra today launches George Ezra & Friends, a unique new podcast series created by the multi-platinum-selling singer, guitarist and songwriter in which he spends an extended period of time with a musician friend in an often intimate, funny and revealing one-to-one conversation.

The first episode, available from today via here, features George in conversation with the biggest male pop star on the planet, Ed Sheeran.George and Ed cover the full gamut of topics from first songs to first gigs, from James Blunt to beer bellies.

“Had it not been for the introduction of podcasts into my life, my second album could well have been ready six months sooner,” says George. “Who knows, maybe even seven. The world of podcasts has been an extremely welcome and comforting distraction from reality. Listening to interesting people talk to other interesting people about interesting things. New ideas, old ideas, thinkers and dreamers.

“A lot of the shows I enjoy are comedians talking to other comedians, candid accounts of their experiences in the industry they work in. I find them inspiring and often relieving. To hear entertainers, talk so openly about the highs and the lows of performance feels like something that hasn’t really happened before and, personally, as a performer, it’s something that really helps me.

“I began looking for musical equivalents: honest, long form conversations between two musicians, the unquestionable highs of creating and performing, alongside honesty regarding things they have struggled with along the way. At the time of digging, nothing jumped out at me. I sat on the idea for some time before finally plucking up the courage to try and do it myself and went out and purchased the gear necessary for me to travel and record at the drop of a hat.

“So far it has been better than I could have ever imagined. I travel to my guests wherever they may be and it is just the two of us in the room. After the initial ten minutes of chat we both loosen up and start to share stories and experiences from our time on the road.

“What started as a labour of love and somewhat of a passion project is shaping up to be one of the best and fulfilling projects I’ve ever been a part of. I hope you find it as interesting and fun to listen to, as it was to make.”

George Ezra is one of the biggest selling male artists of the decade. His debut album WANTED ON VOYAGE is certified 4x platinum in the UK, gold in the US, and was amongst the top 10 biggest selling artist albums in this country in both 2014 and 2015, reaching #1 in the Official UK Chart and spending 122 weeks in the chart overall. In little more than 18 months Ezrawent from virtual unknown to one of the international breakthrough artists of recent times: taking in a top 10 album in 10 countries; three sold out UK tours; nominations for four BRITs, one BBC Music Award and an Ivor Novello.

George will release STAYING AT TAMARA’S on 23 March via Columbia Records through Sony Music Entertainment Australia in digital, CD and vinyl formats. Three years after the release of his chart topping debut album WANTED ON VOYAGE, George returns with a collection of “songs about escapism, dreaming, anxieties and love”. Lead single ‘Paradise’ is available to stream & download now. Described by NME as an “anthem-in-waiting”, the uninhibited, feel-good ‘Paradise’ is now accompanied by a striking, high octane video featuring smashed guitars, cheerleaders, boxers and still-beating hearts, which you can watch here.

George kicks off his world tour in Australia this March. Dates below, head to Secret Sounds to purchase.