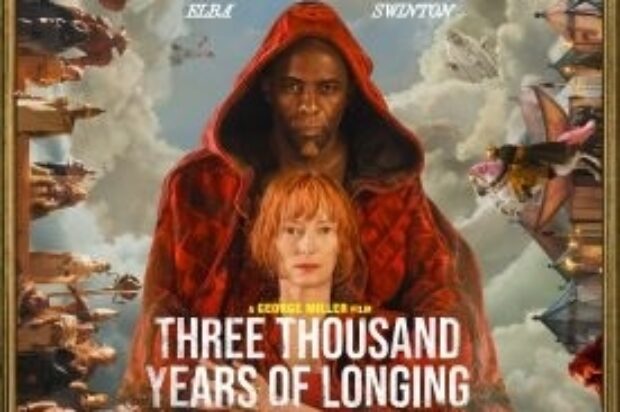 Dr Alithea Binnie (Tilda Swinton) is an academic – content with life and a creature of reason. While in Istanbul attending a conference, she happens to encounter a Djinn (Idris Elba) who offers her three wishes in exchange for
his freedom.

This presents two problems. First, she doubts that he is real and second, because she is a scholar of story and mythology, she knows all the cautionary tales of wishes gone wrong. The Djinn pleads his case by telling
her fantastical stories of his past. Eventually she is beguiled and makes a wish that surprises them both.
George Miller comments.
“When Tilda and Idris came along, it was incredible how much depth and insight they brought,” says Gore. “Significant changes were made to the screenplay, which on one level was shocking because we thought we had worked it out so rigorously, but the rehearsal time afforded us the opportunity, first with Zoom rehearsals, then in the room together, to examine every dimension of the screenplay.”
Miller adds: “What was most important was the interplay between the two characters. What the conflict between them reveals. It’s not so much what an individual actor does, but what the two of them do to each other.”
“Both Tilda and Idris are what I call ‘filmmaking actors’,” he says. “They are insightful about the process, and they are there to get the film made. They are true artists in that way. They’re interested in how the whole team can work together to enhance the entirety of the piece.”
With the film shooting in Australia during the Covid-19 pandemic, the actors had to conduct rehearsals via Zoom during mandatory 14-day quarantines.
“I can’t stare at a screen for long and here I was doing it every day for nine hours,” recalls Elba. “It was tough, but it was a necessary evil. We got a chance to talk and talk, and George is always questioning everything. It’s a different way of working. I’m a guy that lives between action and cut. Every motivation, every thought, every visual, every intention, we really examined that all.”