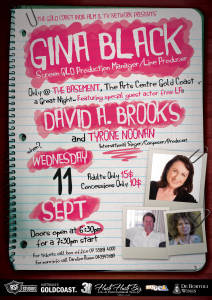 GC Indie Film and TV Network will be putting the spotlight on the special main guest of the network event with a Q&A on Queensland’s Production Expert “Gina Black”. We look forward to sitting down with Gina and discussing her many years within the film and television industry. Founder of GC Indie Film TV Network Events, Caroline Russo will conduct what is sure to be an interesting and enlightening chat with Gina as to what she is working on now.

For many years Gina worked as a Casting assistant for Crawford Productions allowing Gina the privilege of working with many of Australia’s leading Actors, Producers and Directors. Her passion for working behind the scenes moved her into film production and eventually saw her taking on the role as a Freelance Production Manager. Her freelance career took her to Queensland where she spent time working on Offshore Productions, specialising in Movies of the Week, Features and Series Television.

In recent years Gina has been Line Producing as well as Producing and has been dividing her time between Queensland and Victoria. She is now officially a “bi-coastal” Freelancer able to work as a local in both States, however her principal place of residence remains in Queensland. With this vast experience and knowledge Gina has become widely known and respected within the film and TV industry.

We are also very excited for our special guest for the night, LA Film, Television and Theatre Actor David Brooks. David Allen Brooks has been an actor for thirty years. He has to his credit over twenty-six films, many commercials, and television series where he has been the lead and co-star player, including Feature Films such as Cast Away and Red Dragon. He is a member in good standing of the renowned Actor’s Studio in New York City.

David is passionate about his work within the entertainment industry and is excited to pass on his knowledge and share his experiences with others.

“I’m indebted to the creative exploration and emotional openings of the process I’ve had as an actor. I get to pass it on”, said Brooks.

David is presently a certified, professional life coach in Los Angeles and is teaching and coaching at the New York Film Academy. David describes his recent work as a Coach as a way to bring to light what the client authentically wants in their life and to identify the obstacles in their way, in order to discover clarity and aliveness.

Opening up the night’s entertainment is a performance from Queensland singer/songwriter Tyrone Noonan, formerly of the ARIA award winning band George. George was a Brisbane band that saw great success in Australia, with their first album debuting at #1 on the charts and staying in the top 10 for 15 weeks After over 10 years of touring around the world, the members of George, went their separate ways and since then Tyrone began a solo career including releasing 2011 debut full-length solo album ‘I Believe’ produced by Paul Peterson.

Tyrone has returned to his home town of Brisbane, following a five-year journey promoting his music overseas, While touring Tyrone had the great fortune of working with some legendary musicians, as well as creating two awesome band line-ups, both in the UK and the US.

The GCIFTN is a great opportunity for people in the film and television industry to engage and network with their peers in a venue that helps promote filmmakers. Each network brings together some of the finest talent based in South East Queensland and we hope to showcase some of this Indie film work. As always, there are lucky door prizes to win on the night as well.

The Gold Coast Indie Film and Television Network is brought to you by Caroline Russo Media and Promotions and proudly sponsored by Business Gold Coast incentive of the Gold Coast City Council.