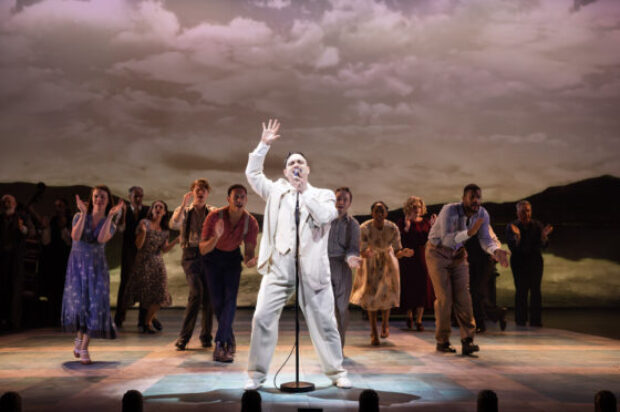 Hit musical Girl from the North Country, written by Conor McPherson, with music and lyrics by Bob Dylan, is one of the most critically acclaimed, multi award-winning productions of the 21st century.

Set in 1930s Minnesota, it has taken the theatrical world by storm, selling out seasons in the West End, Toronto and Broadway since opening at The Old Vic in London and now it’s Brisbane’s turn, with a strictly limited season from 8 September 2022!

Co-Producers GWB Entertainment and Damien Hewitt said, “We are thrilled to be partnering with Brisbane Festival and Queensland Performing Arts Centre to bring this extraordinary production to Brisbane this September. The response from audiences and critics has been phenomenal, and we can’t wait for Brisbane audiences to experience this glorious production featuring one of the finest casts ever to be assembled on the Lyric Theatre stage – this will be one of the major theatrical events of 2022.”

“The No.1 theatre show of the year” The Observer

With twenty of Dylan’s songs including Hurricane, I Want You, Slow Train Coming, Forever Young and Like A Rolling Stone, beautifully reimagined and woven through the story, Girl from the North Country is a modern masterpiece, and fittingly Brisbane Festival’s first announcement of a large-scale theatre production for 2022.

Louise Bezzina, Artistic Director, Brisbane Festival said, “Following the outstanding success of Boy Swallows Universe in 2021, I was keen to present another large-scale theatre work for Brisbane Festival 2022. I am thrilled to be partnering with QPAC, GWB Entertainment and Damien Hewitt to present this internationally acclaimed production this year. At times achingly beautiful and at others starkly haunting, I know our Festival audiences will embrace this award-winning production.”

QPAC Chief Executive John Kotzas echoed the joy of collaborating to present what was hailed by critics as a musical theatre classic in the making almost from its premiere performance. “We know audiences have come to expect a world-class program from Brisbane Festival and this production sits amongst the very best,” Mr Kotzas said. “It brings a brilliant cast of stars together with a very real and human story of community and connection, knitted together with Dylan’s poetic musical genius. This season will be a sure-fire hit with Brisbane audiences.”

In an interview with the New York Times, Bob Dylan confirmed that he has seen the new musical Girl from the North Country.

“I saw it as an anonymous spectator, not as someone who had anything to do with it,” Dylan told the Times. “I just let it happen. The play had me crying at the end. I can’t even say why. When the curtain came down, I was stunned. I really was.”

Irish writer and director Conor McPherson said, “It is an honour to tour this production I’m so proud of around Australia. Our journey from the West End in London and onto Broadway has been monumental, and we have managed to find an incredible Australian cast who bring this magical production to life night.”

What: Girl from the North Country
When: 8 September 2022 for a Strictly Limited Exclusive Season
Tickets: from $49.90*
Bookings: qtix.com.au or 136 246
*Booking and ticketing fees apply
Insta/FB: northcountryau