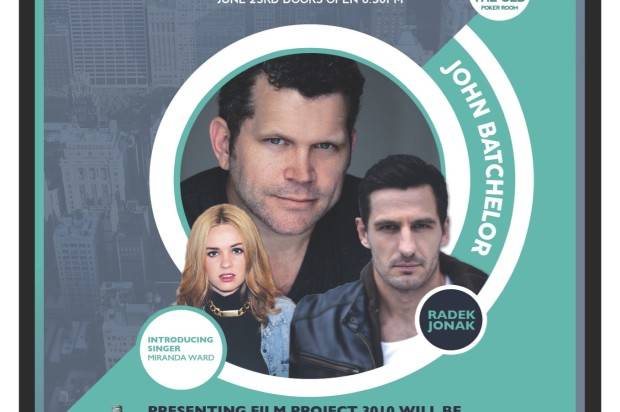 The launch of Gold Coast Indie Film & TV Network Events will be held at Jupiters Hotel & Casino on Monday June 23.
Caroline Russo, founder of the event, aims to highlight different guest speakers and showcase film projects, while bringing together industry professionals.
The season launch will be held in the Old Poker Room at Jupiters Hotel & Casino featuring a very special guest who has trained in all facets of television production including, cameras, directing and floor managing. Screen Queensland’s Director of Development Manager, Jock Blair, has more than fifty years’ experience as a Writer, Story Editor, Producer, Executive Producer and Lecturer in the Australian film and television industry.
Jock was co-creator of a number of highly successful, long running television series and serials such as The Sullivans, Skyways and Bluey.

He held the position of Head of Production for the South Australian Film Corporation for ten years, and during that time he developed, financed and produced nine mini-series, two feature films and three telemovies. Most notable was award-winning mini series, The Shiralee, featuring Bryan Brown, and the feature Playing Beatie Bow, which won the Most Exciting Film Award at the 1987 Moscow Film Festival.
“We are lucky enough to have Mr. Blair join us and share his experiences gained over the many years he has been in the industry. This is going to be a very informative evening with a Q&A session on the night,” said Caroline.
The GCIFTN will also showcase the new film project, 3010. This Sci Fi series features the work of writer Michael Rodrigues and producer Sarah Disney. 3010 takes viewers on an epic adventure, exploring themes of hope, freedom and equality as the main characters endure daily struggles in this unusual and complex world. From the alien controlled mega-cities to the humans living in the ruined wasteland, you will be captivated by the powerful relationships and phenomenal action sequences as you are transported into a world full of danger and heart-stopping excitement.

Attached to the casting of 3010 is one of Australia’s most talented actors who will fly in from Sydney to speak with us, John Batchelor. John is known for his work in hit TV show Sea Patrol, and much-loved Australian film, Red Dog. Our other guest is actor Radek Jonak who is known for many TV roles over the past few years including Red Dog and most recently, 3010.
The night will open on a musical note with singer songwriter Miranda Ward, who is currently working on the release of her debut album with producer Tom Wirth. The young beauty will be sure to captivate hearts with her unique style of music.
There will be other announcements on the night as well as lucky door raffle prizes with all proceeds going towards creating future funding for the industry events. This is a night that will see all the great industry professionals network and is also for anyone who would love to learn more about the business
Following the event, there will be a chance to continue networking or stay the night at Jupiters Hotel & Casino in a Superior Hotel Room for $159.00 per room. Please call Reservations direct on 1800 074 344 and quote Gold Coast Indie Film Festival or book through www.jupitersgoldcoast.com.au using the Group Code GOL230614_001.Please ensure you book early to receive this special rate. You can also enjoy dinner before the event with a fantastic 3-course dining offer at Jupiters Hotel & Casino’s Italian restaurant Osteria Vivo for just $33.00 per person. Please quote Gold Coast Indie Film Festival to receive this offer.
Tickets for the launch event are $20.00 each or $15.00 for Hush Hush Biz VIP Members which can be purchased at the door on the night. Dress code is dress to impress.
GCIFTN is very thankful to all of our sponsors including City of Gold Coast, Jupiters Hotel & Casino, mygc.com.au, The Bizz GC, CSquaredesign, Wishwell, De Borteli Wines, QFI, Mirror News, Hush Hush Biz online magazine and tonight’s sponsor, Sarah Disney Productions.