Adam Rish AFTER DARK Gold Coast City Gallery The World Art of Adam Rish by Caroline Russo | on January 29, 2015 | 0 comments | in arts | Like it 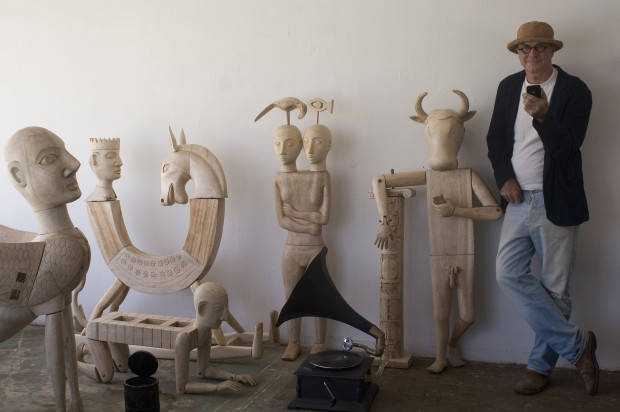 Misanthropology: The World Art of Adam Rish
With Lino Alvarez, Monika Uru Emu, Fatma Goban, Hector Jandany, Lily Karadada, I Wayan Sumantra, Palema Tualau & others
Gold Coast City Gallery
30 January – 15 March
Gallery 2 I Free Entry
Gold Coast City Gallery is pleased to host Sydney-based artist Adam Rish as he showcases four decades of work in Misanthropology: The World Art of Adam Rish from 30 January – 15 March.
Adam Rish’s interest is in cross cultural collaboration as ‘world art’ (like ‘world music’) and thus he has worked with Indigenous artists in Australia, Indonesia, Tonga, Turkey and the US making ceramics, paintings, prints, sculpture and textiles since 1975.
Basing his art on local rather than international influences, Rish employs traditional techniques adapting them with modern technological and domestic images. For example: cars, planes and televisions may take the place of traditional imagery of flowers, birds and clouds.
The exhibition will introduce a monograph on his work, “Misanthropology: The World Art of Adam Rish” with a foreword by celebrated art critic John McDonald, and includes photographic and video documentation and presentations by the artist(s).
Rish’s work is dystopic; he represents a world in confusion, but moderated by a comic humanism. His collaborative pieces are like souvenirs of front-page violence tamed into soft, hybrid folk artforms. Rish calls his practice ‘misanthropology’ in part because, unlike an anthropologist, he deliberately intervenes in the cultural practices of the societies with which he is working.
Rish’s business card states “Adam Rish – Misanthropist: For Disappointments phone ….” He was born in London in 1953 but with his family immigrated to Tasmania in 1962. He graduated in medicine from University of Tasmania in 1978. He studied printmaking at East Sydney Tech in 1979 and sculpture from 1990-1991. He completed a BA (Hons) in Fine Arts, University of Sydney, in 1989 and an MFA, University of NSW, in 1995. Since 1974 he has travelled and worked widely in the US, Europe, Asia, Russia, Turkey, Australia and the Pacific. In addition to his art practice he is also a medical fellow of the Australasian College of Cosmetic Surgery and currently works, lectures and publishes on his specialty interest of cosmetic and laser medicine.
He has exhibited in Australia since 1975 and held 37 solo exhibitions. He has been awarded Visual Arts Board Studio residencies in France and Italy, 1981 and 1984; a VAB Travel Grant, 1992; and an Asialink Residency in Indonesia, 1997. He won the City of Hobart Art Prize, 1998. His work is represented in public collections including the National Gallery of Australia, Tasmanian Museum and Art Gallery, Art Gallery of NSW and Queensland Art
Gallery. His most recent exhibition was a retrospective of his etchings held at the Grafikens Hus museum in Stockholm, Sweden.
AFTER DARK
art.music.talks.food
DATE: Thursday 29 Jan 2015
TIME: Galleries stay open until 8pm I Talks from 6pm I cash bar
Dr Rex Butler, University of Qld, hosts ‘World Artist’ Adam Rish in a conversation about cross-cultural collaboration. Senior Curator Virginia Rigney will also profile some artists working across cultural contexts following her recent trip to the US.
All are welcome, no RSVP required.