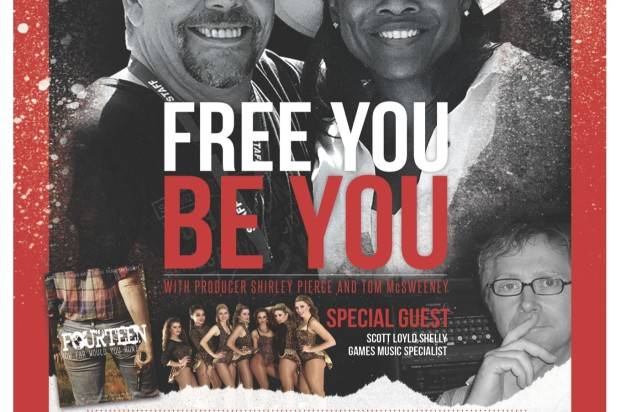 Presents A Night of Industry Clout.

GC Indie Film and TV Network has now concluded five years and what a journey! So far we have had some amazing guests and over the years these Indie Nights have successfully built networks and connected many people in the film industry. November 20th is a special night, as we are now going to be based in the Paradise Room of the Arts Centre. As we approach the Christmas season we have been allowed to extend the room through to 11.30pm and we encourage everyone to get into a party mood! Get dressed up for a good night. The Paradise Room will be comfortable with tables of ten. We can enjoy a drink and order food snacks from the Arts Centre provided at a special price. Having a bigger screen and stage will allow us to present the films and entertainment with couch style interviews and panelists. GCIFTN is aiming to work on a myriad of wonderful projects in the New Year.

November 20 will be a night with a musical feel, where we will introduce and premier the music video clip “Free You Be You”, the anti-bullying dance video created by producers Shirley Pierce, Evolve Film’s David Mace-Kaff and Lauren-ann Smith and Angus Ledgerwood. The video was directed by Tom McSweeney.

GCIFTN is very proud to have played a supportive role in the production of this video. We played a very crucial part in the fund raising to make “Free You Be You” a reality. You may have been there when a member raised her hand to donate much-needed funds towards the production of the video. Caroline Russo founder of GCIFTN described the contribution at the time as an exciting and generous moment where everyone in the room was captured in the emotion.

“It all goes towards supporting a great video that celebrates being a bully survivor, and delivers a message of hope and empowerment with a hip-hop twist”, said Caroline.

Shirley’s inspiration to do the video began when she discovered that her daughter was the victim of both real life and cyber bullies. When other Gold Coast filmmakers learned of the project, they volunteered to donate their time and talent to also stand with bully survivors, letting them know how special they are and that they are not alone. On the night, we will be joined by Casting Director Tom McSweeney who will present this video along with its production team and describe how it all came together.

Another amazing guest will be American composer, songwriter and musician Scott Lloyd Shelly who has been composing for 20 years. His experience includes composing and producing songs and special material for Paramount Pictures films like ‘Witness’ and ‘Top Gun’, and Discovery Channel fans might have noticed Scott’s “original music by” credit on numerous episodes of Steve Irwin’s ‘Crocodile Hunter’ shows. Scott most notably produces in-game music for developers including Accolade, Crystal Dynamics, EA Kids (Electronic Arts), The Learning Company, Knowledge Adventure, Humongous Entertainment, 5th World Media, and recently for the indie game hit Terraria, which was ported to Xbox and Sony PlayStation last year, and Scott is currently writing new additional music for the PC update. In addition to music composition, Scott also creates custom sound fx, casts and supervises dialogue for games when required. After a trip to Australia in the late 70’s playing keyboards for Boz Scaggs, Scott became a permanent resident of Australia in 1999, and is currently quite happily residing on the fabulous Gold Coast with his songwriter/publisher/music supervisor wife Brenda-Lee Heathcote-Shelly.

We are also welcoming Imogen Rogers on the night. Imogen has theatrical back ground. Her talent is in writing, acting and production. For the last few years she has been branching out into film, focusing on producing, writing, acting and production design for various independent feature films (500 Miles, Radio Treason) and shorts (48 hour film project Brisbane). Her short film ‘Fourteen’ will be featured on the night and it is her first endeavour as a producer, writer and actor. Fourteen was made as a teaser for a mini web-series and feature film idea which Imogen has personally strived towards making. With ‘Fourteen’ she has launched a modest production company One Tree Productions. The films focus is on Mother Nature reclaiming Earth after the war and how humanity struggles to survive.

GCIFTN will also be launching its new website (QFI ) Queensland Film Industry, which has been a much awaited website that will be presented by Loic Valmy and Caroline Russo.

We look forward to a few extra treats of entertainment on the night including a great dancing group and the ever stunning talent Sarah Jane Jones Choreography and Wild Child Dancers and the amazing “2 Fresh” Dance Crew who will delight us with some creative dance energy.

Along with maybe some other surprises we have lucky door prizes to hand out on the night.

For all that can remain and stay we have the room until late and we invite everyone to stay back and enjoy themselves.

The Gold Coast Indie Film and Television Network is brought to you by Caroline Russo with Hush Hush Biz and proudly sponsored by Business Gold Coast Initiative of the Australia’s Gold Coast. MyGC.com, The Biz Mag, Hush Hush Biz, Craig Ingham World Stage Promotions, Digital 31, Debortoli Wines and qsquaredesign.
The GCIFTN would also like to thank the Arts Centre Gold Coast for their continued support and association with our event.