American football Bella and the bulldogs hollywood I love that design Jorydn Yarker Nickelodeon’s starlet teenage drama TV SHOWS US by Caroline Russo | on November 19, 2015 | 0 comments | in TV | Like it Some 18 months later, after many tears and frustrations the commitment and belief has won over entertainment industry professionals and young teenagers who now follow her journey through social media.
Jordyn was chosen to play the role of ‘Asha’ (pronounced Ah-Shar) who is a smart, sophisticated country club girl from Australia. She lives in Texas and attends the middle school Silverado High. The school has an American Football team called ‘The Bulldogs’ of which the main star ‘Bella’ (Brec Bassinger) is the head cheerleader, however in a twist of events she becomes the new quarterback.
Newt played by Buddy Handleson, is the smart, nerdy co-lead star who has a crush on Sophie (Lilimar Hernandez, the no-nonsense ‘BFF’ of Bella and co-lead star), but it seems that this crush may have been diffused when ‘Asha’ arrives on the scene. As Newt’s new love interest, he goes out of his way with over the top gestures to ‘woo’ Asha into becoming his girlfriend.
In Jordyn’s debut episode, ‘Too Many Dates’ (Season two, episode 209; airs on Nickelodeon TV on the 18th, November in the USA), Newt surprises all his friends when instead of approaching Sophie, adorns Asha with his Homecoming Mum (a large floral pin and an important Texan tradition). The episode is filled with humorous mishaps and teenage drama in the lead up to and on the night of the school’s Homecoming Dance. Does Newt really like Asha, does Sophie even bother to care, it will all play out in this popular ‘dramedy’ with elements of romantic comedy. 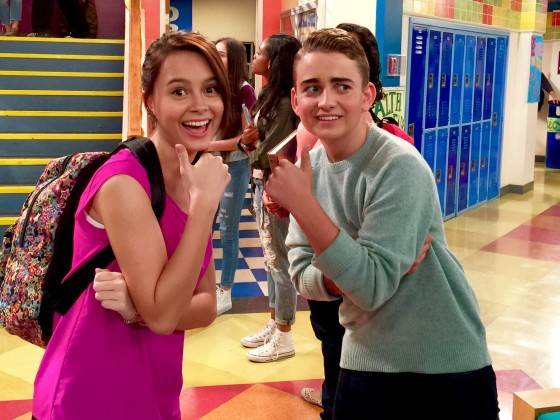 Jordyn Yarker; “It’s amazing… I get to work with talented actors who are awesome teenagers my own age; it makes it so much easier when you can have fun along the way.”
Jordyn’s talent along with the family’s sacrifices to be ‘on the ground’ within the world’s most recognised entertainment city, looks to come to fruition. Jordyn is also recording her new album with three of her songs due to be released in the next month.
“I’m in an amazing space right now, with my new role (Asha, Bella and the Bulldogs), plus I am really excited about my new music direction. It’s taken a long time but it was worth the wait to have great quality artists and producers on board as part of the team. The sound is edgy, modern and youthful… though crossing over from pop country, I wanted to keep the lyrical emotiveness.” Jordyn’s fan base has grown and will continue to grow with the introduction of ‘Asha’ to Bella and the Bulldogs and her music. Her social media fans are genuinely falling in love with this Australian girl; they are excited about growing up with her and being there in her development.
Jordyn Jessica Yarker’s development includes juggling a long list of skills with her online schooling in Australia; Vocal (Hannah Anders), Piano (Southern California Academy of Music, Martial Arts/Stunts (XMA World Headquarters) and Acting (Donna Morong, Aquila Morong Studio).