actors on stage dial m for murder gold coast theatre by Caroline Russo | on March 5, 2019 | 0 comments | in Theatre | Like it 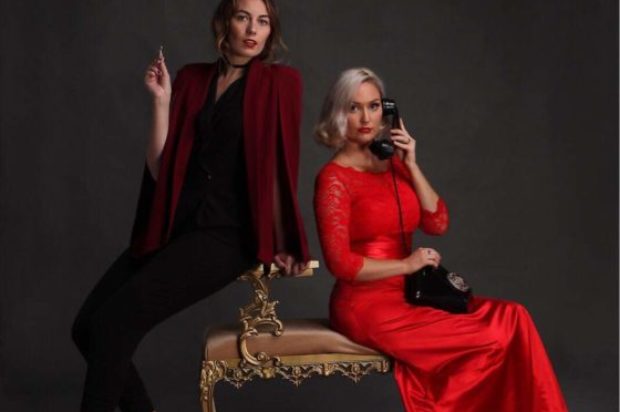 Gold Coast director Nathan Schultz, who bills himself as The Drama Merchant, is putting a new spin on the classic thriller Dial M for Murder.

Schulz has re-imagined Frederick Knotts’ original 1952 theatre script, adapted for Alfred Hitchcock’s movie back in 1954, for a female same-sex couple.
“It’s the first time ever this play will be performed with two women playing the leads,” says Nathan.

The play centers on ex-tennis pro Toni Wendice (Candice Jean) who discovers her wealthy ‘wife’ Sheila (Sophie Lawson) is having an affair – with a man! – and follows events as burning rage turns to a cold murderous calculation.
Driven by revenge and greed for her wife’s substantial wealth, Toni embarks on an elaborate plot to commit the perfect murder.

“Although the writer has provided us with the obligatory corpse, the play is more of a psychological thriller, a cat-and-mouse waiting game,” say Nathan.
This gripping noir thriller, famously brought to the big screen by Hitchcock, transforms the whodunit into ‘will they get away with it?
“Females can be as cunning, calculated and violent as their male counterparts, but they often express their psychopathy in more covert and manipulative ways as Toni does, “Nathan says.

“Society is far more shocked when women commit violent crimes as it goes against the stereotypical gentle of the caring and, at times, fragile nature of womanhood.”
In another intriguing element audiences will watch Toni’s deeds unfold in the setting of the Gold Coast’s historic Preece House, built in 1948.

The intimate, fly-on-the-wall setting adds an immersive element to the play that gives it an eerie underscoring.
“Performing this play in an actual house really adds tension,” says Nathan
“The audience see the characters move from room to room and it’s often what you don’t see that’s most troubling,
“We are the only Gold Coast theatre company currently performing shows in this way.”

Some shows are booked out but there’s still seats available for the March 28 & 29 pm performances at 7.30pm.
Tickets can be purchased at www.thedramamerchant.com.au