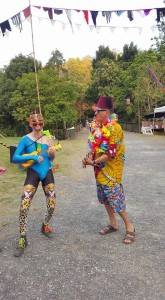 As the reputation of Gold Coast’s cultural scene breaks out of the confines of the city, a partnership between Woodford Folk Festival and the City of Gold Coast has evolved. This year, over ten acts with strong links to the southern sibling of the Sunshine Coast are scheduled to perform at Woodford, resulting in a move some describe as a ‘Gold Rush’.

Hanlon Brothers, the reigning Emerging Artist of the Year at the Gold Coast Music Awards, get people moving on the Woodford dance floors with their hiphop and funk tunes. Beyond the Hanlons, Gold Coaster Nadia Sunde performs 19 times in a variety of acts including the Inaugural Dance Affair, The Treasure of Captain Curlylocks and with The Bella Fontes. The diversity of talent is unique, but very Woodfordesque, with speakers, children’s entertainers, dancers, theatre performances and musicians filling the bill.

It is hoped that as the Commonwealth Games approaches in 2018, the partnership can continue to develop for mutual benefit of both the Queensland Folk Federation and the Gold Coast cultural scene.

· Nadia Sunde performs 19 times in a variety of acts including the Inaugural Dance Affair at The Dance Hall, The Treasure of Captain Curlylocks at The Children’s Festival, and with The Bella Fontes at various venues