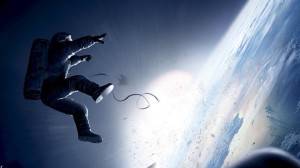 It seems particularly clichéd to describe a film as a “roller-coaster ride”, rarely does a film ever actually achieve the sensation of adrenaline experienced, but for Alfonso Cuaron’s space opus ‘Gravity’ it’s more than a fitting description.  That feeling of fear and exhilaration one experiences when strapped into a compartment racing along an unsound track is amplified as Cuaron effortlessly immerses us in the outer-world, sumptuously presenting the serenity of space before highlighting its lethality.

In the opening 10 minutes of the film (all presented in one continuous shot) Cuaron allows ample time for the beauty of Earth to be emphasized as we are introduced to the two main characters; Ryan Stone (Sandra Bullock) and Matt Kowalsky (George Clooney).  Stone is a medical engineer on her first foray into the great beyond, saddled with the unenviable task of installing a tracking system aboard a floating space station.  Kowalsky is the more experienced vet, slightly cocky and prone to rambling, looking at retirement following his “one last trip”.  The movie never really bothers to elaborate on the particulars of their mission, but it’s never something we desire either as the sole interest of ‘Gravity’ lies with Stone and Kowalsky, and their unlikely partnership is a beautiful compliment to the stunning visuals we are first introduced to.

Once we have settled into what is quickly becoming an enriching cinema experience, Cuaron quite literally takes our breath away as the astronauts learn of a destroyed Russian satellite heading in their direction.  The debris is immense and before they really have an opportunity to assess the situation, they are struck.  With such brutal intensity the station is shattered and so too, it would seem, is the hope of survival.  But survive they must, and from this moment onwards ‘Gravity’ escalates the desperation and terror experienced in every cataclysmic moment.  Like some kind of genius puppet master Cuaron toys with both his characters and the audience as we are thrust headfirst into each unbearable moment, a near-death experience raising its head at almost every turn.

If you have paid attention to the marketing campaign you would know that Bullock is the true lead of the film, and though from a technical standpoint the film is flawless, ‘Gravity’ begins and ends with the actress.  Whilst her dramatic turns haven’t gone unnoticed, she’s mainly known for her charm and comedic timing so witnessing Bullock here with her vanity stripped back and emotions exposed, it’s a timely reminder of how talented an actress she truly is.  I’ll admit I wasn’t as emotionally invested in her as I wanted to be, but that takes nothing away from her performance as her strongest moments come from when she is reflecting on her life, whether it be the past she so securely holds on to or the future she accepts as being potentially short.  It seemed at one stage or another every A-list actress was attached to the role (Angelina Jolie and Natalie Portman almost securing it during pre-production) but watching her here, it seems incomprehensible to imagine anyone else but Bullock playing her.  Clooney isn’t given enough to truly flesh out a character but he’s charming and safe all the same, meaning if you like him as an actor, you’ll like his character.

In addition to the lack of Kowlasky as a character, ‘Gravity’ has a few flaws that prevent it from being an all-around perfect film, but admittedly it seems rather petty to pick on something this good.  The script, courtesy of Cuaron and his writing partner son Jonas, doesn’t always offer up the freshest dialogue (at times feeling like it’s stating the obvious) and the intended emotional hit of the film’s final moments is slightly lost amongst its overt unsubtlety, but such an adventure like this wouldn’t be born if subtlety was Cuaron’s forte.

‘Gravity’ truly is one of this year’s greatest film moments and, without stating the obvious, must be seen on the big screen.  It’s a cinema experience no question and arguably the best use of 3D technology ever formatted.