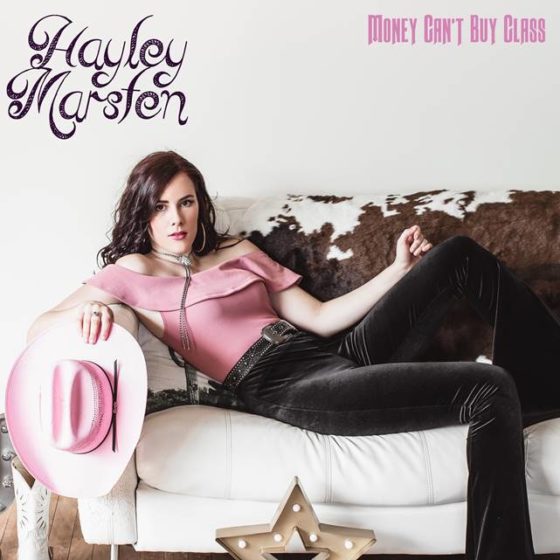 Hayley Marsten today releases her new single and video for ‘Money Can’t Buy Class’, and if there’s one lesson to be learnt it’s this: never be cruel to anyone, because you never know who is a songwriter.

Inspired by a girl who had a lot of nasty things to say about Hayley, like how she could never pull off a designer bag or fancy things, the single is taken from Hayley’s latest EP Lonestar which debuted at #8 on the ARIA Country Charts, #1 on the Australian Independent Records Chart and #3 on the iTunes Country Chart. The previous singles, ‘Until You’ and ‘Second Fiddle’, both cracked the Top 30 in the Australian Country Airplay Charts and ‘Money Can’t Buy Class’ is a catchy, sassy follow-up that’s sure to, well, follow them.

Produced by Matt Fell at Love Hz Studios, the single not only showcases the vocals that took Hayley to the Top 10 in the Toyota Star Maker competition, but also her knack for entertaining storytelling and a self-awareness that’s only growing with age. ‘You say I can’t pull off what you’ve got, honey,’ Hayley sings, ‘it’s cos I’m everything you’re not.’

After receiving a grant from the Regional Arts Development Fund, Hayley recently returned to her hometown of Gladstone to film the video for ‘Money Can’t Buy Class’. She brought the guys from The Filmery, based in NSW, up to Gladstone for the shoot and this video, she says, ‘is the most involved I’ve ever been in the concept and pre-production so I’m extra proud of this one.’

Hayley just wrapped up touring with Andrew Swift and will be heading back out on the road with Arna Georgia in August, following the success of their co-headline ‘Broke and Single’ tour earlier this year. She’s played festivals including the Deni Ute Muster, the Gympie Muster and Broadbeach Festival, and has supported artists including Fanny Lumsden, Deborah Conway, Bill Chambers and Clare Bowditch to name but a few.

Money can’t buy class, but it can’t buy talent either so it’s lucky Hayley has plenty to burn. And what of the girl who inspired the song? ‘She wouldn’t know class if it bit her on the ass,’ says Hayley, ‘and that’s just as well because without her, we’d never have this song’.