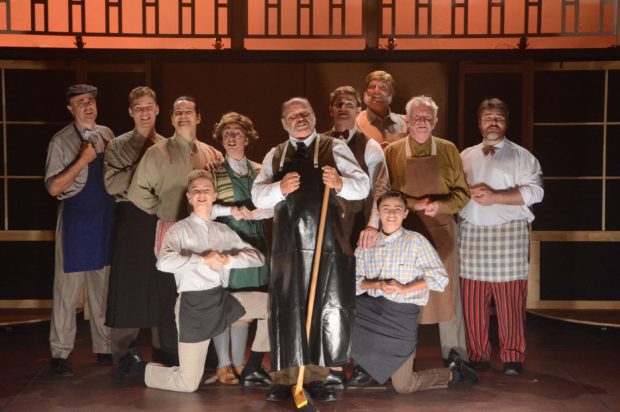 Hello, Dolly! – which turned 54 this year – is by any standards a Broadway vintage classic, which continues to be a hot ticket musical theatre item.

So it should come as no surprise to see stalwart director Kate Peters returning to the Gold Coast Little Theatre with this tried and true package.

Kate, who describes Dolly as the Hamilton of its day, is obviously passionate about the show, which showcased the talents of so many Broadway greats from Carol Channing to Bette Midler and even later Bernadette Peters.

Australia has also produced some memorable Dollies including Jill Perryman and the Gold Coast’s own Sheila Bradley.

The director has penned an essay in the program, as well as run a photo spread from previous shows (including a pointer to her own performances including playing Irene Molloy in Canberra back in 1985 and Dolly Levi in a Tweed Theatre season at Twin Towns in 2008).

So what makes Dolly – which took out 11 Tony Awards including one for Channing in the title role in 1964 – so special?

I suspect it’s a combination of a simple and effective story, some colourful characters, including the over-the-top Dolly herself, and some truly familiar tunes.

Of course, the gutsy Hello, Dolly! theme, slam bang in the middle of the Harmonia Gardens segment in the second half, is a show stopper, but other tunes including Put on Your Sunday Clothes, It Takes a Woman and The Waiters Gallop among other are pretty impressive. For those who don’t know Dolly well – and they do exist – it’s a simple tale based on Thornton Wilder’s play The Matchmaker.

Dolly Levi (Amy McDonald) is a good old fashioned matchmaker who sets out for Yonkers in New York in the 1890s to find a match for half-a-millionaire Horace Vandergelder (Grant Ebeling).

Along the way she terms up with a young milliner Irene Molloy (Louise Harris), whom she plans to match with the much older Horace, and Irene’s friend Minnie (Naomi Mole) as well as two of the boss’s impoverished clerks.

The two young men, Cornelius Hackl (Rory Impellizzeri) and Barnaby Tucker (Andrew Cockroft- Penman), are simply looking for a kiss from a pretty girl, but soon, as they say, love is in the air.

There’s some mix ups along the way, but it’s all fairly innocent – despite a brief court appearance – and true love does find a way.

Kate Peters has put together a large and enthusiastic cast with a robust Amy McDoanld in the lead role and the veteran Grant Ebeling giving us a well-rounded character in Horace.

The supports also deserve a special mention in a cast which has quite a lot of depth, although some struggled with the dancing.

The production values – in the shape of the costumes and set – were impressive and one got the feeling that the largely older audience was having a good time.