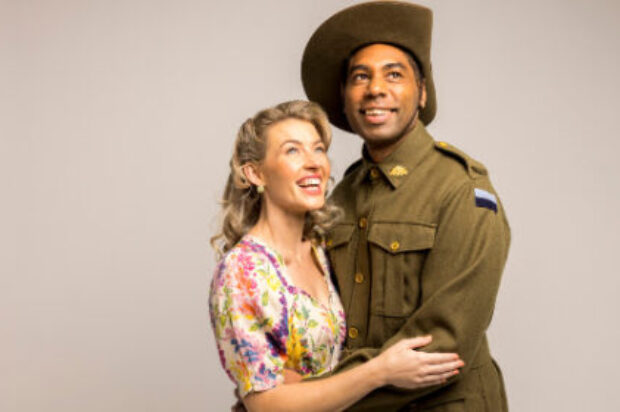 Love will triumph when the Playhouse transforms into a magical dance hall from 9 to 30 July for Queensland Performing Arts Centre (QPAC) and Queensland Theatre’s highly anticipated revival of the hit musical The Sunshine Club, with the remaining cast announced today.

Bangarra Dance Theatre’s Beau Dean Riley Smith (Wiradjuri, Gamilaraay) will make his musical theatre debut as Dave Daylight – the salt of the earth best mate of leading man Frank Doyle. Winner of a Helpmann Award for Best Male Dancer and Australian Dance Award, Riley Smith has been a dancer with Bangarra since 2013, under the direction of Stephen Page, who choreographed the world premiere season of The Sunshine Club in 1999.

Actor Trent Owers (Kamilaroi) will don the pinstripe suit of suave travelling salesman Peter Walsh, who’s around for a good time, not a long time; and singer-songwriter Naarah, from the Gija tribe in The Kimberley, will appear as Pearl Doyle – Frank’s tough-as-nails sister who gets caught in a love triangle with Dave and Peter.

With rehearsals beginning today, Queensland Theatre Artistic Director Lee Lewis said surely it was time to let the sunshine in.

“Every artist who creates a new work hopes that somewhere down the track it will find a new life in a new time with people who care about it. Everyone wants to write a classic, so few people do,” Ms Lewis said.

“This is a home-grown genuine classic by an extraordinary Queensland artist who has given us a gift for now and the future. The music is gorgeous, the dancing is spectacular, the story is heart-warming and there’s the magic of finding new in the old.”

The Sunshine Club follows First Nations soldier Frank, who returns to Brisbane from the battlefields of WWII filled with optimism and ready to start the next chapter of his young life. All he wants to do is spend time with girl next door Rose, but in 1946 Brisbane it’s still frowned upon for black and white to be together.

Filled with hope and defiance Frank sets up his own ballroom, The Sunshine Club, where anyone and everyone can come together… to dance.

Internationally acclaimed playwright and director Wesley Enoch, prolific composer John Rodgers, and a cast of industry icons and leading lights will harness the innate optimism of the musical theatre form to create an unmissable love story – a love story between two young people, and a love letter to a future nation.

The musical received wide acclaim during its initial run, with a Helpmann Award nomination for Best Choreography in a Musical, a Deadly Award for Excellence in Film or Theatrical Score and Matilda Award for book, lyrics and direction.

The Sunshine Club is QPAC and Queensland Theatre’s first major co-production since the record-breaking success of the world premiere of Trent Dalton’s Boy Swallows Universe, adapted for the stage by Tim McGarry, in 2021.