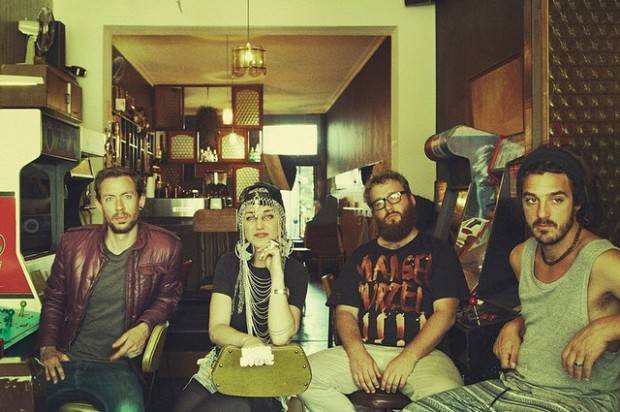 Hiatus Kaiyote made their Jimmy Kimmel Live! debut last night, performing ‘By Fire’ on air and bonus tracks ‘Breathing Underwater’ as well as their Grammy-nominated song ‘Nakamarra’. They also wrapped their month- long U.S. tour with a sold out show at Brooklyn Bowl last night. They also performed with Little Dragon at The Greek Theatre in Los Angeles and were handpicked by Questlove to perform at The Roots Picnic this past weekend. The band will tour Europe and Australia this winter including two shows at the Glastonbury Festival in the UK with Australian tour dates scheduled in August.

The Melbourne based four piece; Nai Palm (vocals/guitar), Paul Bender (bass), Perrin Moss (drums/percussion) and Simon Mavin (keyboards)—released CHOOSE YOUR WEAPON last month on Flying Buddha/Sony Music Masterworks and Sony Music Entertainment Australia. It went on to debut at #1 on the Billboard Heatseekers Chart in the US, and entered the ARIA charts at #22.

 
CHOOSE YOUR WEAPON is available to purchase now. Fans can also enter to win an autographed double-LP limited edition transparent green vinyl copy of Choose Your Weapon. The contest is open until June 8th – http://smarturl.it/HKCYW-VinylGiveaway1.