breaking news mosque in Christchurch New Zealand shooting by Caroline Russo | on March 15, 2019 | 0 comments | in Daily News and Updates | Like it 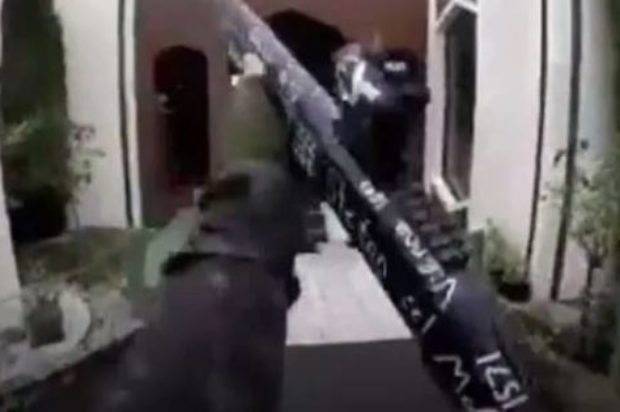 This is breaking news and this has come to hand as to transcript of the killer as to New Zealand news who has live feed himself to do the act today in New Zealand. Up to 50 reproted dead or injurned to date.

He then armed himself and walked into the mosque, with the first victim shot in the doorway.

The gunman was armed with at least one semi-automatic firearm and multiple ammunition clips. Messages in white writing were scrawled on the gun and ammunition.

Once inside he began shooting indiscriminately. A second victim tried to crawl for their life in the main hallway but was shot several more times.

People cowering in corners of a room were all shot as the gunman blocked the hallway, cutting off anyone’s attempt to escape.

He then exited the mosque through the front door – after just under three minutes inside and headed into the street – firing more shots as cars drove past.

He returned to a beige Subaru stationwagon parked in a nearby driveway to get more ammunition.

He fired more shots on the street at no apparent target and said: “Looks like we won’t get the bird today boys”.

He then re-entered the mosque to check for survivors – and began firing again into the people lying motionless.

The 17-minute video ends as the gunman drives away from the scene at speed.

In a 74-page manifesto published online he outlined who he was and why he carried out the massacre at the Christchurch mosque.

He said there was an anti-Islamic motivation to the attack but it was anti-immigration, anti-ethnic replacement and anti-cultural replacement in origin.

He says he was born to a working class low income family who was of Scottish, Irish and English “stock”.

“I had a regular childhood, without any great issues. I had little interest in education during my schooling, barely achieving a passing grade. I did not attend university as I had no great interest in anything offered in the universities to study,” he wrote.

“I am just a regular white man, from a regular family. Who decided to take a stand to ensure a future for my people.”

The man said he worked for a short time before making some money investing in Bitcoin. He then used that money to travel.

The man said he did not originally plan to carry out the attack in New Zealand. He said he came to New Zealand temporarily to plan and train.

“I soon found out that New Zealand was as target rich of an environment as anywhere
else in the West,” he wrote.

“Secondly an attack in New Zealand would bring to attention the truth of the assault on our civilisation, that no where in the world was safe, the invaders were in all of our lands, even in the remotest areas of the world and that there was no where left to go that was safe and free from mass immigration.”

He said the mosque in Dunedin was originally the main target but after visiting the mosques in Christchurch and Linwood and “seeing the desecration of the church that had been converted to a mosque in Ashburton” his plans changed.

The Christchurch and Linwood mosques had far more “invaders” and were more prominent and “optically foreign” buildings with less students, more adults and “a prior history of extremism”.

He said he also planned to attack the Ashburton mosque but was unsure whether he would get there.

The man said he had no remorse over the attack and only wished he could have killed more people.

He said he had no hate towards muslims living in their homelands but disliked those who “invaded” other countries and hated those who converted to Islam.

He said he planned to survive the attack but was aware death was a “definite possibility”.