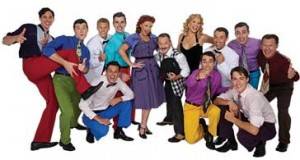 for the Largest Tap Dance

to be in one place at the one time doing the same routine.

To celebrate the national anniversary tour, the cast of Hot Shoe Shuffle are asking dancers aged 8 and above whether they be beginners, pros, adult tappers, students – everyone, to participate in this world record attempt for the largest tap dance. Initially in Brisbane, with further record attempts in Sydney and Melbourne,this unique and exciting event will determine which city will become the Tap Capital of Australia.

“Hot Shoe Shuffle has always been a record breaking show,” said Producer, Director and Star of Hot Shoe Shuffle David Atkins.  “Now we’re having a shot at a world record. This is a great way to launch our anniversary tour.”

Hot Shoe Shuffle is one of the most successful Australian Musicals of all time. The hot and fast paced Tap Dance musical comedy starring Bobby Fox, Jaz Flowers, David Atkins and The Tap Brothers is touring Australia in 2013 commencing on 3 May at QPAC in Brisbane.

All those who register and attend the world record attempt in Brisbane will receive, on the day of the attempt, a unique code giving access to discounted tickets to see the much anticipated 2013 production of Hot Shoe Shuffle at QPAC. Also the dance school with the most individual registrations will win 10 front row tickets to the show. Participants are asked to bring their tap shoes and a colourful T-shirt to Reddacliff Place (Brisbane Square) on Sunday, 21 April at 10am.

“Australia has produced some of the world’s best tap dancers and the world record attempt is a chance for every tap dancer in Brisbane, Sydney and Melbourne to take part in a world record event,” said Mr Atkins.

According to the Guinness Book of World Records the current record was set on 24 May 1998 in Stuttgart, Germany when 6,951 tap dancers performed a 2 minute and 15 second routine.

Participation is open to anyone and everyone over the age of 8. To register to take part in this World Record Attempt please visitwww.hotshoeshuffle.com/record and fill out the online form. Each participant much register individually.

Once registered, participants will be emailed a video link so you have plenty of time to pre-learn the routine. Further information about the world record attempt will also be sent closer to the date.

A world record attempt in Sydney will also take place in June and in Melbourne inAugust.