HOTEL PORTOFINO TO AIR ON FOXTEL

#FOXTEL #HOTELPORTOFINO by Caroline Russo | on February 7, 2022 | 0 comments | in Uncategorized | Like it To celebrate the premiere of the lavish new British drama series, HOTEL PORTOFINO, FOXTEL has partnered with THE ICONIC to curate “The Portofino Edit” – a bespoke capsule collection inspired by the Italian Riviera and the timeless looks of the roaring 1920s featured in the series.

The glamorous six-part period drama, featuring a stellar ensemble cast including Natasha McElhone, Anna Chancellor, Mark Umbers and Australia’s own Claude Scott-Mitchell (The Dry), revolves around the family of Bella Ainsworth (Natasha McElhone, Californication), the daughter of a wealthy industrialist who has moved her family to Italy to set up a quintessentially British hotel in the breathtakingly beautiful town of Portofino.

Alongside all of the intrigue and mystery that unfolds throughout the series, HOTEL PORTOFINO is also a veritable feast for the eyes, as every new guest we meet at the hotel stuns with an impressive wardrobe showcasing the best of 1920s fashion, from high-waisted bikinis and tea dresses to linen suits, coloured vintage sunglasses and oversized hats.

Featuring more than 120 products across fashion, accessories, beauty and homewares, “The Portofino Edit”, exclusive to The Iconic, offers a unique and modern twist on the classic fashion inspired by the series.

“There’s so much about 1920s fashion that is still on trend today, so we jumped at the opportunity to curate an edit that allows shoppers and fans alike to play around with fabrics, colours, and looks that could transport them to the Italian Riviera of that era,” said Nicole Adolphe, Head of Style at THE ICONIC who curated the Edit.

“We looked for pieces with a similar silhouette and feel to what features in Hotel Portofino and was popular nearly 100 years ago on the Italian seaside, including Peter Pan collars, belted swimwear, wide-brimmed hats and knitted dresses. There’s also the timeless men’s fashion that features heavily in the series and the Edit: linen suits, pants and shirts, and the always on-trend fedora.
“And we couldn’t pass up accessories including beach towels, round and coloured sunglasses, sun hats and costume jewellery that really bring the Italian beachside look to life.

“The Portofino Edit” also offers fans a deeper connection to the series through transporting viewers to the iconic Italian Riviera at a time when we’re all craving an escape, but overseas travel remains out of touch for many.”

Said HOTEL PORTOFINO Series Director, Adam Wimpenny on the costumes created for the series: “We wanted to have fun with the costumes, using them to give each guest their very own style and brand. We have famous tennis stars, British aristocrats, American show girls, Italian playboys…it’s a very eclectic melting pot. 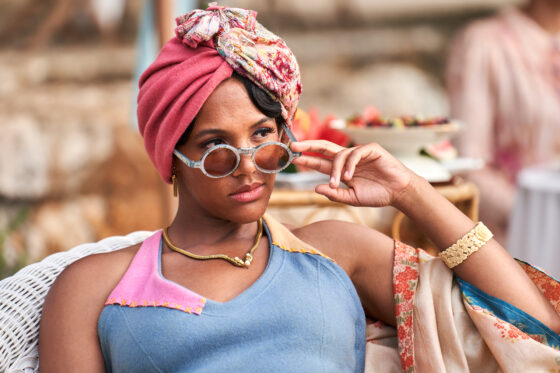 “Louize Nissen, the costume designer, was responsible for the incredible costumes we used in the show. The colours and fabrics she used really help bring the characters to life.”

Said Australian HOTEL PORTOFINO star Claude Scott-Mitchell: “Fashion is an amazing tool in understanding character. In Hotel Portofino, it’s easier to profile a character in period dress and get inside the role. It’s an amazing way to access a character.”

“The Portofino Edit” is available to shop on www.THEICONIC.com.au from February 8th.
HOTEL PORTOFINO premieres with a double episode on Tuesday, February 8 at 8.30pm AEDT On Demand on FOXTEL and on Fox Showcase