Christmas DELTA GOODREM HUMAN NATURE Music The Christmas Album by Caroline Russo | on November 20, 2015 | 0 comments | in Music | Like it 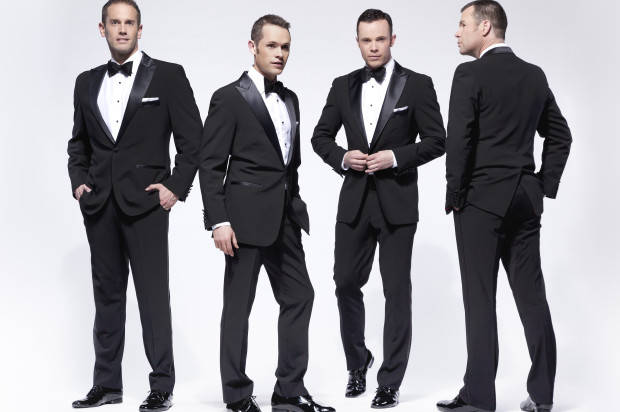 FEATURING 4 NEW SONGS INCLUDING DELTA GOODREM ON ‘LET IT SNOW’

Featuring recorded versions of seasonal classics such as ‘Christmas (Baby Please Come Home)’, ‘Santa Claus is Coming To Town’, ‘White Christmas’, ‘Winter Wonderland’ and ‘Have Yourself A Merry Little Christmas’ amongst others, this special Deluxe Edition will include ‘Holy Joly Christmas’, ‘Run Rudolph Run’, ‘I’ll Be Home For Christmas’ plus a very special recording of ‘Let It Snow’ featuring Delta Goodrem.

‘Let It Snow’ featuring Delta Goodrem is at radio now and the video available to view HERE.

Recording the extra tracks alongside the original album satisfied a creative impulse within the band… it
just ‘felt’ right.

“I guess we love Christmas,” explains Andrew, “it was fun making the original album. People really connected with us doing this music. There’s a couple of songs we hadn’t had a chance to do on the first record. One of them was in particular ‘Let It Snow’.”

Delta Goodrem singing with Human Nature is perfect sonic symmetry. Throw in the five-some singing a Christmas classic like ‘Let It Snow’and it’s somehow even more perfect.
     
“Delta’s iconic in Australia,” says Andrew, “It’s such a great thing, as singers, to collaborate with other great singers. Working with Delta is really fun and we heard she was mad for Christmas – a real Christmas junkie – and so it was a joy to work with her. She got in the spirit with the ugly jumpers (in the video clip) as well. She’s got such a unique voice and it was really nice to be able to create this special take on ‘Let It Snow’, which I think hopefully will become an Aussie Christmas classic. You never know”.

To record the tune, the boys took a quick trip to Los Angeles. There’s no phoning it in when it comes to Human Nature, Delta and… a Christmas classic!

“We needed to actually be together,”continues Toby. “It was great to see her working in the studio. She was amazing. She just walked in and nailed it from the get go.”

Executive producing the Deluxe Edition tracks on the record is the legendary Bob Rock (Michael Buble, Bryan Adams and Metallica). Together producer Dave Pierce, Rock and the boys have cut a searing take on Chuck Berry’s ‘Run Rudolph Run’that recalls the energy on their last outing, the multi-platinum hit record JUKEBOX.

HUMAN NATURE – THE CHRISTMAS ALBUM was produced by Grammy Award-winning producer Harvey Mason Jnr and his production partner Damon Thomas (aka The Underdogs) as well as some of the world’s top musicians. The album brings to life the ultimate collection of the most popular Christmas songs together with a flair that stems from a high-energy Motown rhythm, making this album the ultimate feel- good Christmas release whilst still featuring some of the festive season’s most poignant tracks.

Brothers Andrew and Michael Tierney along with high-school friends Toby Allen and Phil Burton formed Human Nature over 23 years ago as four young men who never dreamed of the success that would come their way. Signing with Sony Music Australia in 1995 the group have released nine albums (five of which hit number one in Australia), achieved 23 platinum awards, 17 top 40 hits and five top 10 hits worldwide and sold over two million albums in Australia alone. Fast-forward to 2009 when Human Nature hit the big time in America and have held a residency for six years on the prestigious Las Vegas strip, currently at The Venetian Casino & Resort Las Vegas.

THE CHRISTMAS ALBUM debuted at #3 on the ARIA Albums chart and is certified Platinum.