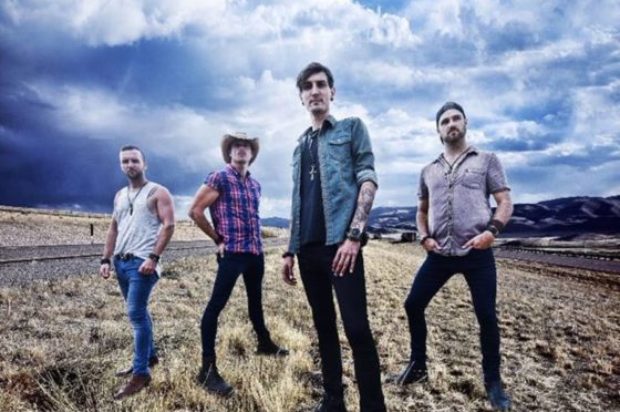 HURRICANE FALL
RELEASE NEW SINGLE & VIDEO FOR ‘DON’T MISS ME’
After a momentous 2016, rock edge country band Hurricane Fall have returned with an even bigger 2017, and today announce the release of their new single and video for ‘Don’t Miss Me’, taken from their latest EP ‘How We Get Down’.

Recorded and produced by the band at Spinlight Studios, ‘Don’t Miss Me’ shows Hurricane Falls’ talent and ability to diversify their sound and make a song showcasing a softer side and one with deep meaning.

‘Don’t Miss Me’ is a sobering look into the realities of war and the servicemen and women who fight them. The song is based on a story told by the lead vocals and bass player, Pepper’s grandfather. When he was drafted, he told his wife that if he were never to return, then ‘Don’t Miss Me’. The song hits home for the band members who all have friends and family who have or are currently serving in the armed forces. “This song means a lot to us, as it is very close to our hearts, and we want to share that with everyone” Pepper said.

Produced by Hurricane Fall and Tom Bofinger from Gravity Films, the video for ‘Don’t Miss Me’ intercuts between footage of soldiers at war and of the band playing in an old church that has now been turned Into a music venue. The location shows a softer side of the band and also their love for Newcastle, their home.

The band are currently touring the nation and heading internationally to New Zealand. You can catch them at one of the following shows / festivals: