Amy Adams HER Joaquin Phoenix Scarlett Johansson by Caroline Russo | on January 12, 2014 | 0 comments | in Film Release & Reviews | Like it 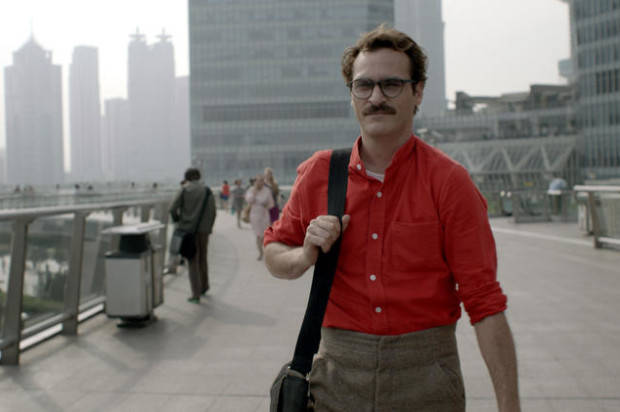 CINEMA RELEASE: HER
Release date: 16th January 2014
Director: Spike Jonze
Cast: Joaquin Phoenix, Amy Adams, Scarlett Johansson, Rooney Mara, Olivia Wilde, Chris Pratt
Classification: MA15+ (Strong Sexual References and Coarse Language)
Review by Peter Gray
Despite Spike Jonze’s ‘Her’ being a relatively far-fetched idea, there is more truth laid here than in any one of the countless romantic comedies Hollywood has churned out over the last few years. A touching, and very accurate, portrayal of the challenges and frustrations that come with a romantic relationship, ‘Her’ may stretch the boundaries of believability having a man fall in love with an operating system, but in an era where we are so attached to technology and will happily converse with people we don’t know through various forms of media – who’s to say it isn’t possible?
The film itself focuses on Theodore Twombly (Joaquin Phoenix), a writer who makes a living creating “personalised” letters and poetry paid by individuals to send to their loved ones. Beautiful and poetic his writing may be, Theodore’s life is one far removed from his profession as he desperately clings on to the memory of his marriage. Lost in the happiness he once felt with his ex-wife Catherine (Rooney Mara), Theodore opts to try out a new program – an operating system designed to evolve and adapt like a human being. Wanting his OS to assume a female identity, Theodore is taken aback when the voice talking back to him is warm, witty and oddly attractive. Quickly learning the speed at which she can access and process information, she names herself ‘Samantha’ after scouring a book on baby names within a split second. As the voice of Samantha, Scarlett Johansson is simply phenomenal, delivering an award-worthy performance despite not one minute of physical screen time. It may only be her voice, but what a voice it is! The detail and emotion that she harnesses through her delivery is breathtaking, making it all the more feasible when Theodore admits to falling in love with her.
As for Theodore, Phoenix plays him perfectly. There’s honesty in his delivery that enables us to accept his deep love for Samantha too. In addition to his moments with ‘Her’, there are segments of beauty with Amy Adams, once again proving how utterly radiant she is on screen. Starring as Theodore’s friend and semi-neighbour Amy, she brings the same sense of compassion and sympathy to the film as her character clearly understands his situation and accepts him throughout his troubled marriage and the unorthodox relationship he has begun with Samantha, as she too is in a crumbling union (her marriage seemingly on the verge of ending) and has developed a friendship with her own OS. The supporting cast is just as good with Mara providing a stable balance to the more offbeat Phoenix, never allowing her ex-to-be to fall into stereotypical villainy, and the gorgeous and captivating Olivia Wilde popping up as a brief yet rather tense blind date for Theodore. A scene-stealing Chris Pratt is on hand for the films more lightweight moments as one of Theodore’s work mates, surprisingly bettering the film the more we get to know him, and in one of the more bizarre cameos to be seen as of late, director/writer Jonze lends his vocals to a foul-mouthed alien character in a virtual video game that Theodore plays. Whilst the language here may be unnecessary, there’s no denying some of the biggest laughs are courtesy of this strange little creation.
As written by Jonze, ‘Her’ is provocative but no less personal as the relationship it deals with is still very real and emotional. It takes out the focus of sex (though there are still some strong sexual moments between Theodore and Samantha) and hones in on the true value of companionship, something all the characters here are in desperate need of. In addition to the striking script, there’s a real effervescence to the visual style of the film that Jonze has created alongside Hoyte Van Hoytema (soon to have his work viewed in the hotly anticipated ‘Interstellar’ from Christopher Nolan), with it only slightly bordering on science fiction. The stunning soundtrack from rock assembly Arcade Fire and the costume detailing – particularly on the high waist lines of some of the male characters – only add to the overall beautiful intricacies ‘Her’ delivers. With perhaps 30 minutes easily available to be trimmed off the overall running time, ‘Her’ comes dangerously close to being perfect.
My rating 4.5/5 (Arrange to meet ‘Her’ as soon as you can)