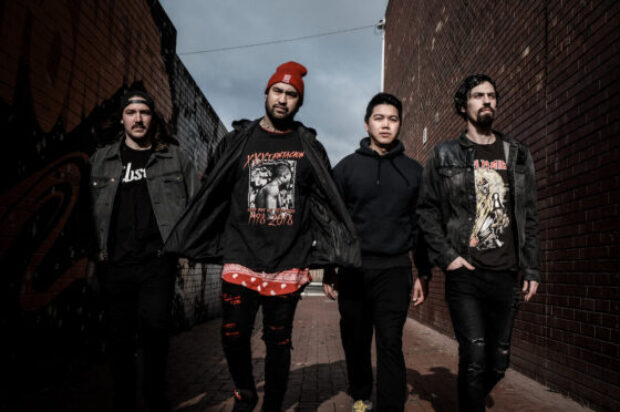 Australian hard rock band The Dreadful Tides has released House of Pain, the follow-up to their 2021 debut Crazy. Just as their first single revealed, the Melbourne based group’s brand of rock is a fusion of old school classic 70s à la Black Sabbath, Kiss and Mötley Crüe blended with the 90s rock angst of Rage Against The Machine and Alice in Chains. The band, who comprise Holden Stirling (vocals), Justin Strudwick (guitar), Darius Kooth (bass), and Leland Hallett (drums), generate a convincing hybrid rock soundscape, decidedly bare and with each member’s performance easy identifiable yet with enough distortion to create the accepted sort of rock intensity.

The song at first seems to revolve around the governing guitar riff, the rhythm section and its choices catering to its nuances, but its use as a foundation for the chorus diverts the track toward another destination—where the chorus rises above the riff and becomes a relatively restrained yet successful hook. Holden’s suitably versatile vocal skill matches the pent-up grit of the music, with the band’s ability to unite rock styles—the melancholic edge of grunge with the melodic sensibilities of late 70s early 80s rock—just one aspect, part of their allure and ultimately the combination that will set them apart from others working in the same genre. House of Pain’s chorus is suitably understated without forgoing the power needed to sustain the dynamic structure; its hook is strong but not necessarily overblown. Another well-considered attribute is the recurring guitar riff’s placement throughout the song. It becomes a highly effective counterpoint to the chorus as it winds its way through the track as an anchoring point. House of Pain is a confident and accomplished release and sure to land The Dreadful Tides onto numerous playlists and attract positive responses from followers and new fans alike.