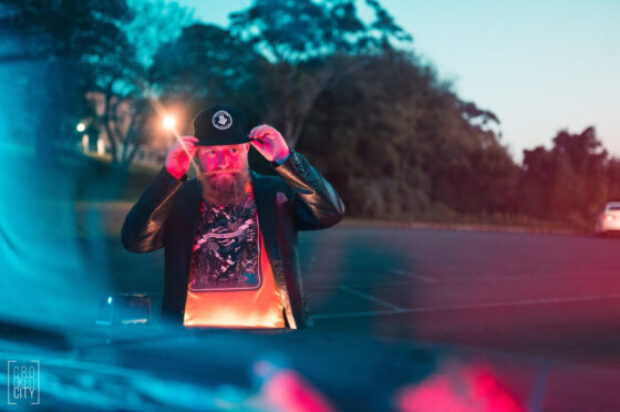 The new release for fast-rising Australian rapper Primitive is called Sydney Highway and features Olly Stern and Claire Ertansel. In a short period, Primitive (aka Peter Sandercock) has made a substantial impact on the ever-growing Sydney rap scene, attracting a loyal fan base and affirming a burgeoning reputation for unapologetic Aussie rap. The 2017 ‘Rising Mc’s’ winner now holds regular residencies around the city, drawing inspiration from addiction, emotion, pain, and discovery—a process that’s assisted his hard-fought and celebrated seven years of sobriety. As Primitive says about the new release, ‘Sydney Highway is one of the most chill songs on the album and is an absolute lo-fi banger. I met Olly Stern and Claire Ertansel at Uni, and we immediately gelled. We had the perfect mix: A rapper, dope beat and two amazing vocalists. To me, Sydney Highway is probably my favourite song on the album.’ The new track merges a playful mood and marries that with raw poetic imagery and identifiable hooks, bouncing off a musical backdrop that complements the energy that flows through this easy-going tale of cruisy drives when times are good. Despite the sense of ‘fun’ that resonates throughout Sydney Highway, the story behind Primitive’s rise is more nuanced. As he says about his background and how it has affected his music, ‘I fought most of my life with drug, alcohol, and gambling addiction.

I have been clean, sober and without a bet for several years, thanks to 12-step fellowships. Much of my music refers to where I came from and where I am now.’ Primitive’s wordplay is the central focus here, but it is anchored by a chorus part that balances melodic invention with narrative precision. When asked about his long-term goals, Primitive says, ‘I always want to keep the music passionate, relative, and authentic. A world tour is the big dream.’ And no doubt, the release of Sydney Highway is one more step towards making that big dream a reality.