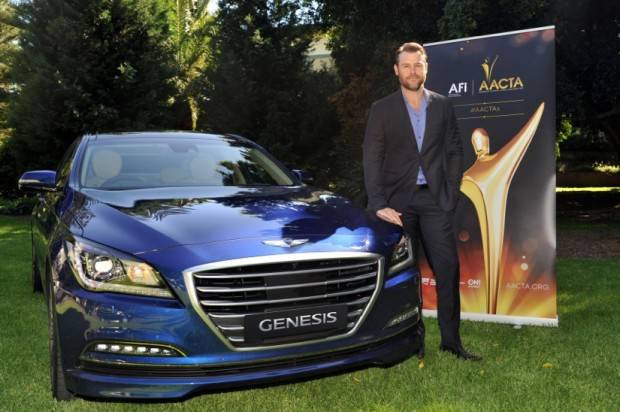 The two year partnership announcement was made by AFI | AACTA CEO Damian Trewhella to a packed house at the Opening Night of the AACTA Awards Screenings in Sydney last night. Trewhella said that the Hyundai partnership was the first significant new partner to be announced this year.

Hyundai will provide a fleet of new Genesis luxury cars to transfer the AACTA Awards nominees, host and guest presenters around Sydney during the week leading up to the 4th AACTA Awards, including for the glamorous and stylish Red Carpet arrivals at the AACTA Awards Ceremony on January 29.

“We couldn’t be more excited to welcome this world-renowned brand as a valued partner. Hyundai have experienced enormous growth in recent years, and we hope to both leverage from and further expand this growth via our innovative new partnership with Hyundai,” Trewhella said.

“As a direct result of our new partnership with Hyundai, we will be able to provide an unprecedented opportunity for emerging filmmakers to have their work seen, shared and acknowledged by film enthusiasts and industry in Australia and abroad via a dedicated website and social media sharing and voting. This innovative new program will create new exposure for our talented up-and-coming filmmakers, and for our industry at large,” Trewhella said.

“Hyundai Motor Company Australia is delighted to announce the new partnership with AACTA,” said Hyundai Motor Company Australia Director of Marketing, Oliver Mann. “Genesis signals a new era in the evolution of Hyundai. It’s the perfect showcase for what we believe is a game-changing premium sedan, and we’re proud to be supporting Australia’s film industry and its new generation of talent.”

COUNTDOWN TO THE AACTA AWARDS | SYDNEY 2015
The Australian Academy of Cinema and Television Arts celebrates screen excellence throughout the year culminating in three major events during January. The AACTA Awards Luncheon presented by Deluxe and the AACTA Awards Ceremony and Official After Party are held in Sydney and are proudly supported by the NSW Government, through its tourism and major events agency Destination NSW, and are a key creative industries event on the NSW Events Calendar. The 4th AACTA Awards follow three highly successful Awards seasons since the launch of AACTA by the Australian Film Institute (AFI) in 2011.

About Hyundai Motor
Established in 1967, Hyundai Motor Co. has grown into the Hyundai Motor Group, with more than two dozen auto-related subsidiaries and affiliates. Hyundai Motor — which has seven manufacturing bases outside of South Korea including Brazil, China, the Czech Republic, India, Russia, Turkey and the U.S. — sold 4.73 million vehicles globally in 2013. Hyundai Motor, which employs almost 100,000 employees worldwide, offers a full line-up of products including small to large passenger vehicles, SUVs and commercial vehicles. Hyundai Motor strives to strengthen its leadership in clean technology, starting with the world’s first mass-produced hydrogen-powered vehicle, ix35 Fuel Cell. Further information about Hyundai Motor and its products is available at www.hyundai.com.

Hyundai Motor Company Australia Pty Ltd (HMCA) was established on October 1st, 2003 as a wholly owned subsidiary of Hyundai Motor Company. The award-winning range of Hyundai vehicles continues to set segment and industry benchmarks in value, quality, and safety, with innovations such as Vehicle Stability Management, Electronic Stability Control, and Australia’s first five-year warranty with unlimited kilometres.
Hyundai Motor Company is the fastest growing automotive brand since 2005, according to the 2012 Interbrand ‘Best Global Brand’ survey, with an increase of 115%. The growth rate of the Hyundai Motor Company brand in the last year alone has been calculated at 24.4%, against an industry average of 11.2%. Its current brand value of US$7.5 billion ranks it seventh among global automotive companies.