Ian Steinlake and John Batchelor on Project One Shot 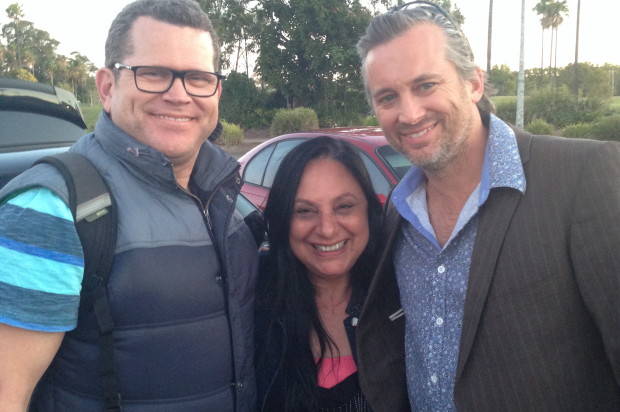 Project: One Shot takes filmmaking to a whole new level in its challenging yet enthusiastic move to re-establish the Queensland film industry.
Producing a television series or feature film? Easy, done that. What about filming more than 30 scenes with no cuts, with around 120 actors, all under 20 minutes? That’s more like it, and Project: One Shot certainly rose to the challenge. Conceived and successfully executed by Gold Coast born director, Darwin Brooks, the project stars A-listers like John Batchelor and Ian Stenlake as they meander through one of the Gold Coast’s most glamorous shopping villages.
“It’s a slice of life on a fictitious day in Sanctuary Cove, Marina Village,” Ian said.
Filmed by Australian Steadicam operator, Gary Collins, ‘Project: One Shot’ is literally just one rolling shot of gossip, love, and action in a busy lifestyle on a lively film set. Part of the project was to re-establish the Queensland film industry and the amount of support and enthusiasm from cast and crew wanting to join was overwhelming. On top of that, everyone contributed $100 to the project, out of their own pocket, just to keep it alive.
“[Brooks] put it out, ideas to people whether they wanted to jump on board, and everybody wanted to jump on board. Then you go, ‘oh well thanks very much, we’ll just take these people’ but no; everyone on board, it’s audacious!” John said.
“I’m joined by a vibrant Queensland film industry that wants to put its hand up and say, ‘hey I’m here’. We do good stuff and we’re ready to go, so it feels great to be a part of that,” Ian said. John Batchelor agreed that sometimes the financial elements of filmmaking don’t always work out in the best interest for the working actor or crew. The constant quest for budgeting and short term series means a severe lack in job security and financial stability.
“Too many of our crew end up leaving the state because they aren’t fulfilled, just like the actors…that’s wrong, it’s just fundamentally wrong, to tell everybody that you just can’t work here,”
“A lot of our drama is dependent upon funding, so people will write for a funding model. So if the funders say what we are funding is an eight part series or six part series…then afterwards everybody’s unemployed and back in the pool again,”
“It’s economics as much as it is art,” John said.
By Sarah Beecroft