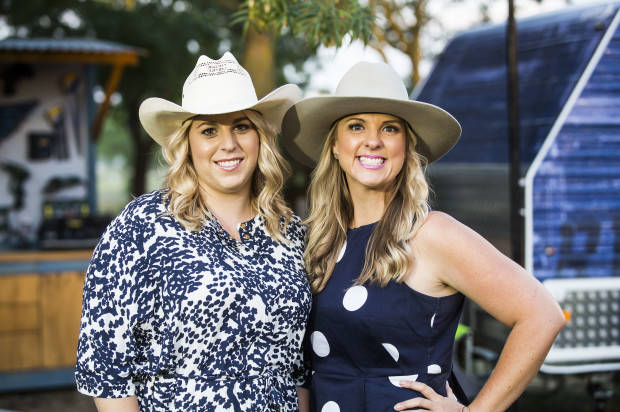 Channel Nine’s ‘Reno Rumble’ has divided the country in half with the West Coast vs. the East Coast in a battle of renovation. Bestie and fun-loving country gals Sarah and Renee from team Blue are team captains this week, and with a massive reveal tonight we chatted to them about their rival teammates, inspiration and what is next for them after the show.

HHB: What was it like when you were told you were going to be on Reno Rumble?

Renee: It’s an amazing opportunity. Unbelievable to start with to think, you know, how on earth? There were so many auditions to get on Reno Rumble. So yeah, very exciting but it was very challenging too.

Sarah: I think we were in dream-land thinking “oh yeah, we’ll be on it” and then you’re there and you go “wow”, how much work there is. You’re really surprised at what goes in to make the show.

How much renovation experience did you have before the show?

Sarah: I’ve done a bathroom and we redecorated all through the house as well.

Where do you get the inspiration for your ideas for the renovations?

Do you get along with the other teams?

Renee: Look, we’re pretty lucky, Sarah and I do get along with most teams well. There is obviously a couple of teams that we get along with particularly well. No big beef or anything like that with anyone but obviously you meet people for a reason and some you really gel with and some you don’t.

How competitive are you?

You would like to think that everyone’s on the same page with everything and trying to help each other out, but when that doesn’t occur you might end up playing the game and stuff. It reminds us daily that it is a competition and “do you want to go home at the end of the week?” so it’s very much you have to be here.

Renee: Sarah and I were a bit reluctant at first going, “Oh, straight up?” and I said “We’ll be right Sarah” but we couldn’t be happier with Maddy and Dave. We couldn’t have been happier, honestly. It was a kitchen that Sarah and I would welcome into our own homes. We were really happy with the outcome.

Will you continue to renovate after the show is finished?

Renee: It’s funny you should say that I was just saying to Sarah one of our local builders here in Mt Isa was actually at my house today and I was looking at putting in more structural beams and have a flat roof in my kitchen and lounge room area, so I don’t think it’s going to stop just yet for me.

Sarah: I have a few things in the pipeline, I’m looking to build my daughter a cubby house. Probably for Christmas, I’m probably going to start that sooner or later.

You’re the team captains this week, were you nervous or excited going into that?

Renee: I was really excited about it, it’s really nice to have the budgeting. Sarah loves delegating money, she’s good with the money. I don’t particularly look at the money because I’m shocking with stuff like that. I trust Sarah with anything she wants to purchase, she’s a savvy shopper.

Sarah: We both talk about what we want and what direction we want to go in, so we kind of know what we are going for and try make it the best we can.

Renee: And I think having the experience with two other couples who have been leaders, picking up from their experience with things that might not have worked that we could incorporate. Communication is paramount to us, particularly this week don’t like to be shafted off like we were last week in the garden plans, but that’s ok. So look out look out, Sarah and Renee are about! To be in charge of the budget, that’s what we like. $200,000, how could you not be happy with that?

How does it feel to be the only all-girl team?

Sarah: I don’t know; we didn’t really think about it too much.

Renee: It wasn’t something that crossed our minds until it was brought to our attention a good couple of weeks in. We were like “oh what?”. We don’t really see each other like that because we take on so many roles and we are very capable of doing those roles so I don’t think thinking that we’re not good for carrying wheelbarrows full of bricks and breaking down a wall, you know, it’s something we are able to do. We’re not worried about breaking a nail or anything, we’re a pretty good force to not be reckoned with.

And I think it’s a good achievement for girls, especially girls that don’t think they can do that. Especially things like drilling a hole and letting someone else do it, it’s nothing to be scared of. If you mess it up, you mess it up. What’s the worst that can happen?

What would be your least favourite room to renovate?

Renee: I probably don’t have a worst… actually no I do I lied. I don’t have any children so I would say children’s rooms, if I had to be given that challenge I don’t think I would handle that well.

Sarah: The hardest room to do would most definitely, styling wise, would have to be the kitchen. There’s a fine line between getting that right and just going overboard. Otherwise, it would have to be the lounge room. That’s a hard one. Gotta love a bedroom though, and a bathroom, they’re great.

Can you give us any spoilers for tonight’s reveal?

Renee: You don’t really know wat’s going to be shown, it’s always a surprise. I think Sarah and I get more entertained watching it play over and how it’s edited. There’s obviously going to be a few fireworks, literally, about the fireplace. So we know that’s going to come and raise some heads, but at the end o the day it was the judge’s decision. Thing’s will be good, it’ll be fine. I don’t know how Lisa and John will go with their splashback, who knows? Who knows what will happen?

Definitely watch out for my facial expressions when Scotty Cam drops me in it when he tells Nadia that we knew all along.

Renee: We’re really appreciative of the support the nation has given for Sarah and I, particularly because we’re from Mt Isa. We also think to that some of the criticism, I think people just need to be more aware of the comments that they make. We are only human. Your whole life is turned upside down so there is some validation there for how people do behave and I think that the general public need to be a little more mindful when writing their comments.

Sarah: I think social media and the internet forgets that they’re actually human beings. It’s fair enough to say that you don’t like us but when there’s really hateful comments you go “wow, really people?”. So common courtesy and respect, maybe they should look at their own backyards. We are very lucky that we are supported by all of the contestants and we’re really lucky to have so many people that are really wonderful to us. That’s what keeps you going and that’s what keeps everything flowing along really nicely. We appreciate that and I’m sure that everyone else on the blue team and the red team appreciates support.

Reno Rumble is on Monday and Tuesday nights on the NINE NETWORK at 8.40pm.