INTO THE WOODS STAGE PLAY FOR THE FIRST TIME IN BRISBANE

Go ‘Into the Woods’ with the new production presented by Harvest Rain Theatre Company this weekend 1st-4th October at the Concert Hall, QPAC. It will be Brisbane’s first professional production of the Stephen Sondheim classic musical and they have certainly put together a star-studded cast.

The Tony Award winning ‘Into the Woods’ revolves around the fairytale characters you know and love from your childhood. Cinderella and her Prince, Little Red Riding Hood and the Wolf, Rapunzel, the Witch, Jack (who climbed the beanstalk) and a myriad of other magical characters whose stories intertwine in a genius way.

The Baker and his Wife, played by Eddie Perfect and Rachael Beck, embark on a whimsical journey, when they discover they are cursed in being forever childless by a vengeful Witch, played by the brilliant Rhonda Burchmore OAM.

To break the spell the pair goes into the woods to collect the ingredients needed to do so and to restore the beauty of The Witch; a cow as white as milk, a cape as red as blood, hair as yellow as corn and a slipper as pure as gold. The adventure takes a turn as the fairytale hopefuls realise what trouble ensues when they receive all they wished for. 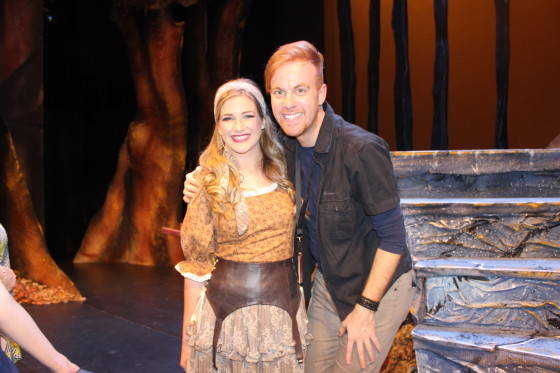 The director, Tim O’Connor has created a version of this iconic play that will resonate with audiences on a deeper level that ever before. O’Conner still stays true to the beautiful story of morality that Stephen Sondheim and James Lapine created almost 30 years ago. The comedic aspect of this dramatic narrative keeps it light-hearted with all the characters performing that side of their role.

“We have the perfect cast and I believe our Premier, Annastacia Palaszczuk who is the Arts Minister is a great supporter of the Arts, however musical theatre is not something that receives a great deal of support and I would love to see that change,” O’Connor says.

Rhonda Burchmore best known for roles in Mamma Mia and Cry me a River, is a knockout that brings fire and mystic to The Witch. She deserves a standing ovation for her character versatility and the way she digs deep showing her sensitive side in ‘Stay with me’, as she comforts her ‘daughter’ Rapunzel.

Eddie Perfect the talented, actor, singer and comedian famous for his roles in Offspring, Playschool and Shane Warne the musical, is very honoured to be in a Sondheim show, especially as The Baker, as they do not come by very often.

“This is the first production of Into the Woods in Brisbane, so I am very excited to be in a very smart, funny and moving piece of theatre,” Perfect says. 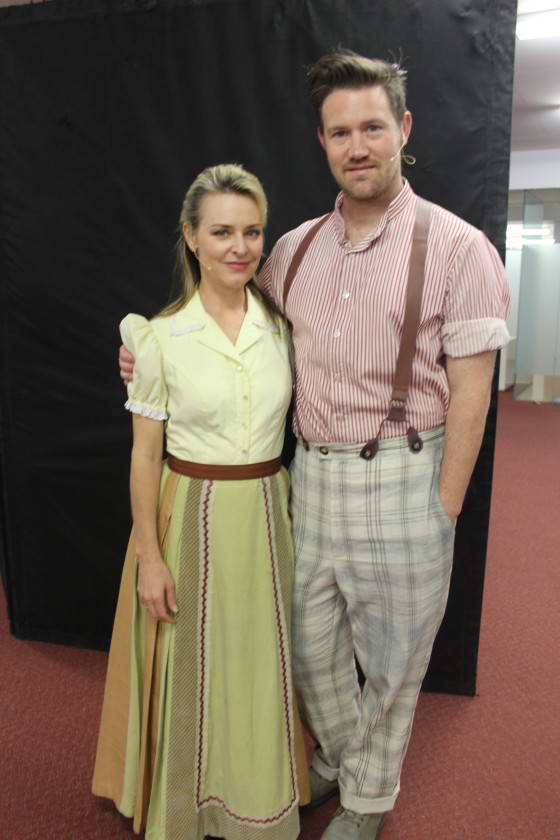 Rachael Beck (The Baker’s Wife) and Eddie Perfect (The Baker)

Perfect’s performance in the show has a certain charm and shows particularly how vulnerable The Baker is in the climax of the show. The way he interacts with Rachael Beck is very comedic and quirky especially in the number ‘It Takes Two’, this is the moment they reunite with three of the four objects.

“This story is not a jazz hands musical, it is sophisticated and deals with morality and getting what you wish for, also what children listen to and what they do not,” Perfect says.

Rachael Beck another legend in the musical theatre industry is known for her role as Truly Scrumptious in Chitty Chitty Bang Bang, Beauty and the Beast and Cats, she graces the stage as The Baker’s Wife and believes her and Eddie act as the audience to the fairytale around them.

“We are the everyday Australians in this show and we meet the wonderful fairytale characters, perhaps we are the conscience and hopefully people will see it through our eyes,” Beck says.

Beck highlights her comedic chops in the show and has the woman going mad enthusiasm going on particularly in ‘A Very Nice Prince’. Of course you cannot fault her beautiful voice that soars through the hall in ‘Moments in the Woods’. That is a standout moment for Rachael, she is stunning and eccentric all at once.

“My character is very down-trodden and has not had much adventure in her life, so when she is brave enough to go to the woods it’s like drugs or a drop down into her life, because suddenly she sees Cinderella and other fairytales, it’s really a fantastic fantasy,” Beck says. 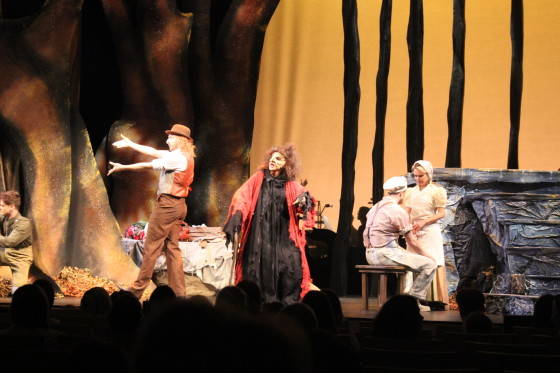 A newcomer in the performing arts industry, Georgina Hopson plays Cinderella. She attended the Queensland Conservatorium of Music in Brisbane, she has made a top 6 finalist for the Rob Guest Endowment Award and has recently performed in Pirates of Penzance in the role of Mabel for Harvest Rain Theatre Company. Her character, Cinderella is in the midst of her own life crisis when the Baker’s Wife gets thrown into her troubles.

“Even though we are fairytale characters, everything that’s said in the show relates to everyday life, the audience will appreciate the magic and I am blessed with a ball gown that’s dropped from the sky,” Hopson says.

Hopson is very thrilled for her second professional production with Harvest Rain and she hopes she does justice to the gorgeous music and ‘intricate and complicated’ script. Georgina shows off her incredible soprano voice by embodying Cinderella in the song ‘On the Steps of the Palace’. She makes the stage her own and proves women to be strong, brave and complex in the best way. 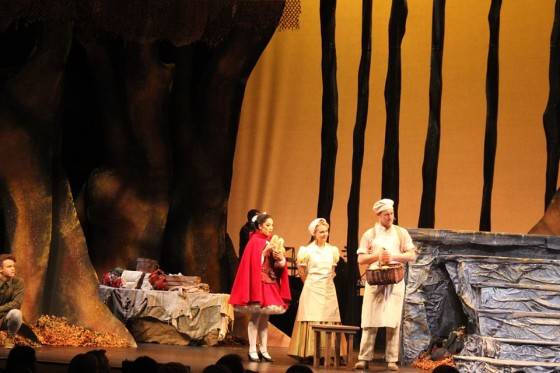 The minor roles of Kimberly Hodgson (Red Riding Hood), Tom Oliver (Jack), Dean Vince (The Narrator) and Natalie Greer (Rapunzel) have spectacular performances in this classic tale, leaving the audience in stitches, especially in the ‘Prologue’.

Brisbane has finally got what they have wished for with this stellar piece. Overall a brilliant show that finds the magic, morality and mayhem in all of us, Brisbane will be captivated by going Into the Woods. Everyone buy your tickets, this weekend only at QPAC.

See the interviews with Rachael Beck and Tim O’Connor here