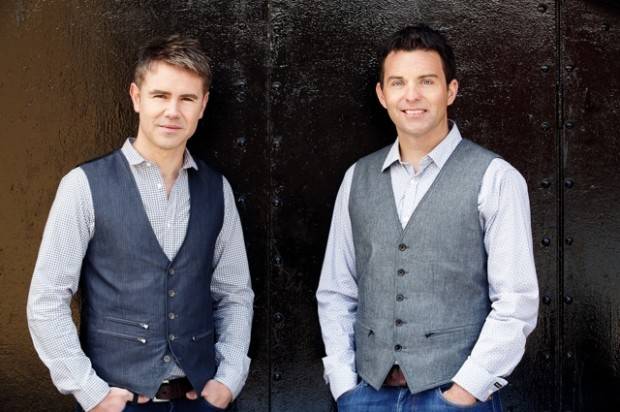 Byrne and Kelly to tour in October in Australia.

Ryan Kelly is one very busy traveller, performer and artist. A few years ago we spoke to him while he was at home in his kitchen having a cup of tea, which is very rare, between touring with “Celtic Thunder”. Today we speak to him while he is still in America on tour and is preparing to travel to our shores very soon with his very successful duo act Byrne and Kelly that got started back in 2013.

It all began with a series of shows called ‘Acoustic By Candlelight’ with combined traditional Irish and Americana fresh, folk sound backed by guitar, fiddle, keyboard and mandolin. “We are working on new album that are originals which has been about a year, and we will be playing two of them: The Garden, and Home from Home.”
We asked what it takes for him to write and it is “lock down where for weeks or more that no one will see me much, and then I will meet with Neil and we bash it around and then into the studios to record it. To then perform is the real satisfaction and we love performing and can’t wait to come back to Australia as all our fans have been amazing to us there.” The duo’s second album release, Live in Australia, was recorded live at The Vanguard in Sydney, Australia in June 2014. Following the release later in the year, Live in Australia quickly became the #1 World album on Billboard, iTunes, Amazon and cdbaby.
With that huge feat Australia must be a lucky charm for the duo, Ryan says “it is for us and we feel very excited that it links us more so with retuning here.” Artists that have inspired Ryan are two of his favourite singers, “Damian Rice, amazing singer and right on, and Luke Kelly, as he really tells the story in such a Irish way.”
“Brisbane will be the last stop of the tour where we will have a great celebration afterwards and then we will be back home for Christmas.” Be quick to book for Byrne and Kelly.