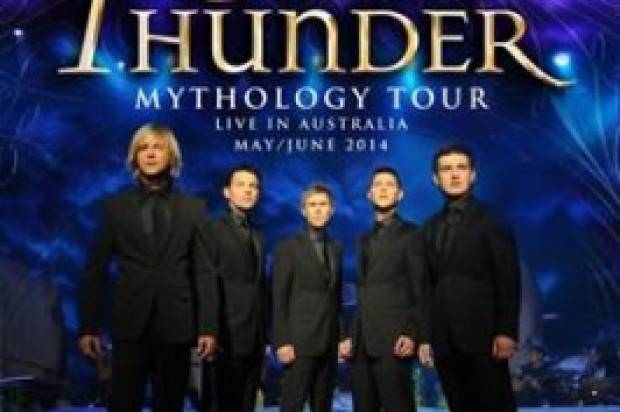 Following the tragic death of original principal singer George Donaldson last month, Celtic Thunder has announced they will be dedicating their upcomingMythology Australian tour in May/June this year to the late member. George’s death has stunned his fellow band mates, along with their fans. He was highly regarded and loved by all. Affectionately known as “Big George”, he was invaluable in helping to establish the show’s trademark celebration of Celtic heritage.
Emmet Cahill, who left the show in December to pursue a solo career, has graciously rescheduled other commitments to join the tour with Keith, Ryan, Neil and Colm, to pay tribute and honour their lost friend and colleague. “I am deeply saddened by the death of not only a colleague but a friend and felt that it was only right to re join the guys on this momentous occasion, paying homage to a wonderful man.”
Ahead of the tour commencing, the internationally successful group will arrive in Sydney on May 7 for a three day promo visit ahead of their biggest tour to date, beginning in Hobart May 12. The spectacular Mythology tour will be covering an extensive 22 dates across capital city and regional markets throughout Australia, concluding in Perth on June 13.

The Mythology DVD debuted at #1 on the ARIA chart and remained on the chart for 25 weeks. Following on from Mythology and to coincide with the tour Universal Music Australia will be releasing a new DVD and CD package on April 18 titled My Land. This is an Australian exclusive release.

My Land DVD is an hour-long journey alongside the members of Celtic Thunder as they bring you to their favourite places in Ireland and Scotland, chat about growing up Celtic, about making the Mythology Show and about the love they feel for their homeland. The DVD features footage and interviews with George Donaldson at his home in Scotland, and in Ireland interacting with the rest of Celtic Thunder. The My Land package also features a bonus CD with unreleased audio tracks from Mythology.

Both the bonus DVD and CD will feature an extra special tribute the Australian fans, a Celtic Thunder version of Waltzing Matilda, recorded especially for the Australian release of My Land and available just in time for the Mythology tour.

Mythology is without a doubt Celtic Thunder’s most extravagant and spectacular show to date. Taking you through the history of the Celtic people, this show looks back at the heritage and influences of the Celtic community. To see what Australian audiences can expect click here