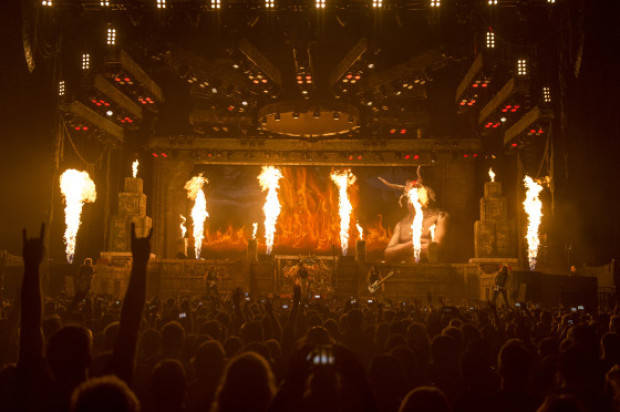 
Last Thursday, British heavy metal legends IRON MAIDEN kicked off The Book Of Souls World Tour in Fort Lauderdale, Florida which will see the band travelling to 36 countries around the world over the next six months!

IRON MAIDEN, one of the biggest rock bands in history are renowned for their spectacular live shows and tour the world like no other travelling on their own Boeing 747-400 Jumbo Jet plane piloted by lead singer, Bruce Dickinson.

The new Ed Force One will transport band, crew and over 20 tons of equipment across 6 of the 7 continents clocking up over 90,000km on The Book of Souls World Tour.

The live show and massive brand new stage production has received rave reviews since it commenced in the US last week with sold out arena shows in Fort Lauderdale, Tulsa and Las Vegas before heading south to the delight of 40,000 fans in Mexico City.

There aren’t many metal bands who can keep a grip on a 20,000-seat arena anymore, and Wednesday night brought fresh evidence that Iron Maiden isn’t letting go just yet. – Sun Sentinel, Florida

“Iron Maiden’s reputation as a renowned heavy metal group will go down in music history. Tulsa had the opportunity to experience why they are considered one of the biggest musical acts in the world”. – Tulsa World

Iron Maiden hit the stage with a vengeance, their trademark intensity and vigor showing no signs of slowing down. – Revolver Mag

“Scream for me Floridaaaaaaa!” Bruce Dickinson screamed, and Maiden fans came from near and far to do just that. Dickinson proclaimed his signature cry over and over in between performing a total of six Book of Souls cuts… this tour will blow the mind of fans old and new” – Loudwire

It’s Australia’s turn to witness the spectacle that is Iron Maiden live and plane spot Ed Force One as the band commences the Australian leg with 5 capital city dates in May: