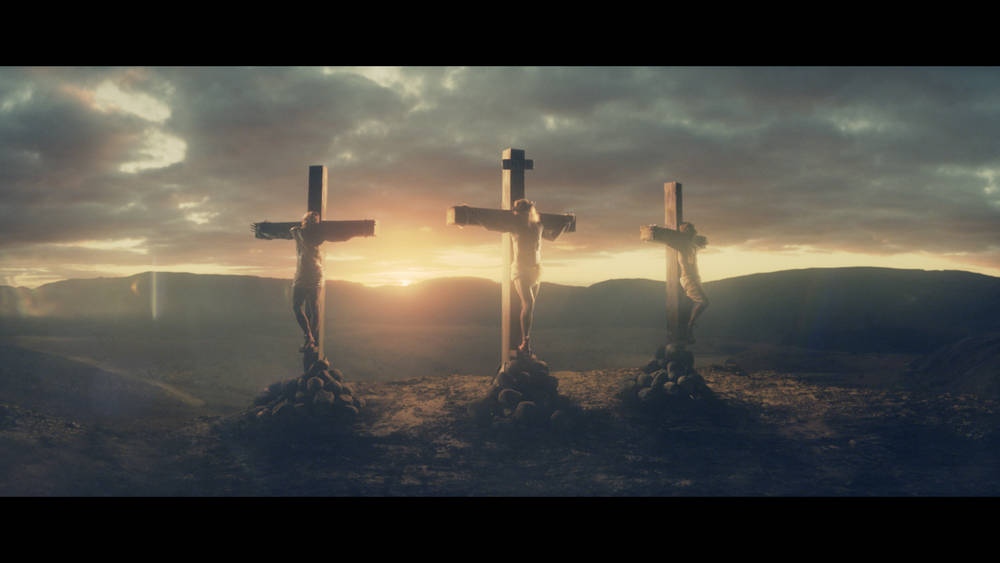 First there was Hitler on a T-rex, then dancing Vladimir Putin – now, Jesus with a machine gun! A new character trailer for Iron Sky launched.

Just a little over a week ago the makers of the Finnish-German science fiction comedy Iron Sky The Coming Race caught the attention of the media around the world with their dancing Vladimir Putin -character video. The video gained nearly two million hits on it’s release week and was featured widely in the press – including a full run on Russia’s most prolific TV channel, RT.

Today, the filmmakers have launched a brand new character trailer, introducing one of the 12 villains of the film – Jesus Christ. Played by Jukka Hildén from a Finnish extreme stunts group The Dudesons, the Savior rips himself off the cross and goes nuts, armed with two MG42 machine guns.

“Jesus has been portrayed as a peace loving pacifist, but in reality, he was a patriotic rebel”, director Timo Vuorensola says. “The upcoming Iron Sky film shows a much more belligerent version of Jesus.”

Quotes like “I have come to cast fire upon the Earth; and how I wish it were already kindled (Luke 12:49) ” and “I have not come to bring peace but a sword” (Matthew 10:34) are given a whole new meaning in the video.
Jukka Hildén from Dudesons is known for his crazy stunts and role of fighter-Jesus fits his resume. “This was a wild offer and one that I could not refuse. Iron Sky team are very independent and have their own way of doing things, just like us. That is something to look up to,” Jukka comments the upcoming project.

The Dudesons, hailing from Finland, have had their own show on MTV, had a part in Jackass 3D feature film, and participated in Gumball 3000 car racing events.

Iron Sky The Coming Race is currently being crowd funded at IndieGoGo, having raised over quarter of a million dollars so far: http://www.igg.me/at/thecomingrace
  
Iron Sky on social media:
http://facebook.com/ironsky
http://twitter.com/ironskyfilm
http://youtube.com/ironskyuniverse
http://instagram.com/ironskyfilm